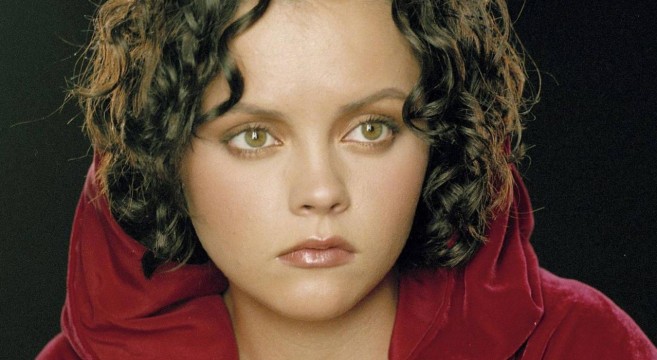 Christina Ricci was born on February 12, 1980 in Santa Monica, CA but her family moved to Montclair soon after she was born. Christina is the youngest child of Sarah and Ralph Ricci. In Montclair, she attended  Edgemont Elementary School, Glenfield Middle School and Montclair High School. She left Montclair High to attend the Morristown-Beard School but left that after only one year to study at the Professional Children’s School in New York City.

A critic for the Bergen Record discovered Ricci at age eight in a school play (The Twelve Days of Christmas) at Edgemont Elementary. Another child was originally cast in the role, but Ricci got him to hit her and told on him; he lost the role to her as part of his punishment. Apparently, she’s been feisty her whole life!

Christina got her start on TV when she appeared in a couple of parody commercials in the late night sketch variety show Saturday Night Live. The first of these featured Ricci as a child at a birthday party in which medical waste fell out of a burst piñata, parodying the then-topical dumping of medical waste in the rivers of the United States’ east coast.

Ricci’s big screen debut was in 1990’s Mermaids as Cher’s character’s younger daughter. The following year, she starred as Wednesday Addams in the feature film adaptation of The Addams Family. She reprised the role for the film’s 1993 sequel, Addams Family Values.

The rest is Hollywood history!