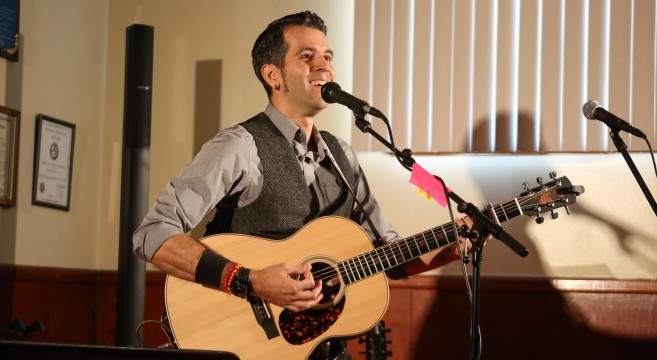 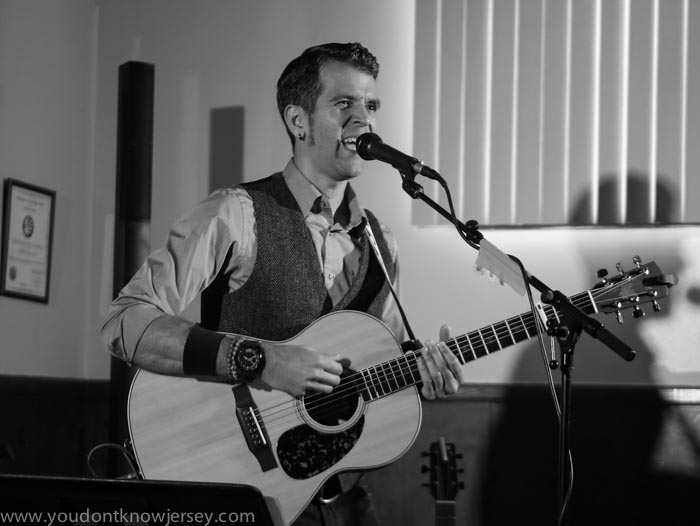 Michael Aquino is a singer songwriter from Bloomfield who writes heartfelt music delivered with honest emotion. His music blends an array of genres such as folk, Latin and rock. His excellent debut album Giants Will Fall, released in October last year, took over three years to complete and displays all the creative energy Aquino exerts. In addition to music he is also a professional actor who is quite involved in the New Jersey and New York theater scene.

You may recognize his name from the YDKJ ‘Stuff This in Yer Face’ Song Writing Challenge. The challenge was Michael’s baby and he really ran with it.

Michael was up to the Top Ten challenge and his list is below:

In 1999, Kris, a friend and former band mate, sat me down in his parent’s Clifton home and insisted I listen to Jeff Buckley’s Grace. As “Mojo Pin” began, the opening sounds, harmonics, and Jeff’s playful voice carted me away on a musical journey. By the time I heard the hard-hitting “Dream Brother” I was in a state of disbelief and true admiration. Grace blew apart my notion of what songwriting could be. The songs are musically all over the map, but Jeff made them feel like they belonged on the same album. It’s the result of a brilliant artist at play. 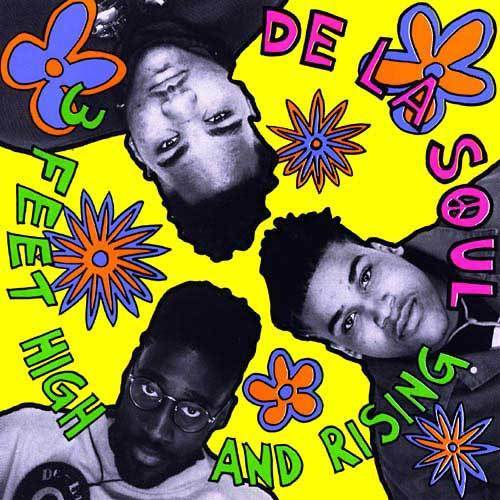 My buddy, Greg, and I would watch Video Music Box after school. I remember that afternoon when we heard “Potholes in my Lawn” for the first time. We were confused but intrigued by the song. It messed with our city kid brains. I convinced my parents to take a trip to Two Guys to pick up the cassette. 3 Feet High and Rising’s 67 minutes completely held my attention. And for a 12 year-old, even back in 1989, that was impressive. The album includes crazy skits, wild sampling, and amazing rapping. Pos and Dave compliment each other’s flow. This album is epic and one I revisit frequently.

Back in 2005 I threw Knuckle Down in the CD player of my hand-me-down Ford Taurus after my wife and I purchased the album from CD World in Totowa. Right from the start, we were sucked in by Ani’s aggressive guitar and the warm boom of Todd Sickafoose’s upright bass. We reached our neighborhood about a half hour later, but we kept driving so we could finish listening to the whole thing in one sitting. Full of introspective stories and tight arrangements (mostly guitar, bass, and drums) this quickly became my favorite Ani album and a big influence on my songwriting and guitar attack.

This record played at all of my family gatherings back in the 80s-90s. The vinyl edition, of course. At the time, it was required listening in our households. I still have my parent’s LP in my current collection. Siembra has been infused into my DNA. It informs my rhythmic playing and my lyrical approach. Willie Colón’s arrangements will make you want to dance, but make sure to check out what Ruben Blades was writing about. It’s a powerful album when it comes to Latino social issues. Make sure to turn it up!

I vacillated between this album and Pinkerton (another powerhouse collection of songs) but this one eked it out. My friend Jessie used the song “Only in Dreams” in an acting scene for a college course. I asked her who wrote the song and when she told me Weezer, I couldn’t believe it was those same “Buddy Holly” guys. I put aside my reservations for that song and listened to the Blue Album. I was blown away. The next year Jessie and I went to see Weezer at Roseland. I remember I couldn’t hear for three days after that concert, but it was so damn worth it. The “World Has Turned and Left Me Here” is an all time favorite song. And “Buddy Holly” has since grown on me. 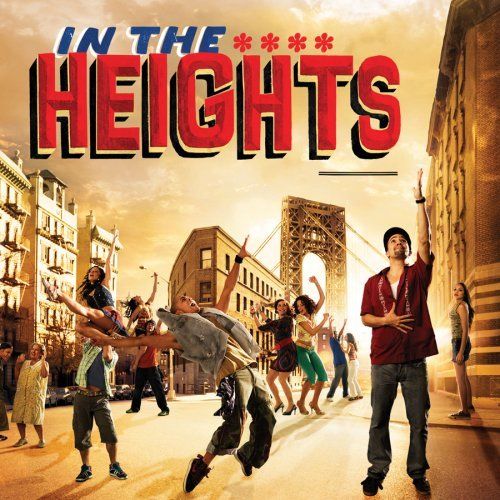 Original Broadway Cast Recording of In The Heights – Lin-Manuel Miranda

I remember seeing a commercial in 2008 of a Latino rapping and then the camera quickly cuts to reveal a scene of people dancing salsa in the streets. It looked like a summer day back in my hometown of Union City. The commercial ended with the words, In The Heights, A New Musical. My head began spinning with excitement. My wife and I bought the soundtrack and fell in love with it. The music sounded like my childhood set to a powerfully uplifting story of a neighborhood on the cusp of gentrification. Within that next year Dania and I went to the Richards Rodgers Theatre to see Lin-Manuel Miranda’s In the Heights, and it was then that I recognized its importance to both the Latino community and the musical theatre world.

Don’t Turn Away – Face to Face

Back in college, a classmate of mine, Alberto, made me a mixed tape. On side A was Pink Floyd. On side B was the 90s band Face to Face—their music made my face melt. I remember talking Alberto’s ear off about their infectious lyrics and the intensity of their sound. Weeks later I picked up their first album, Don’t Turn Away and it lived on my 40-second, anti-skip CD player for months. “You don’t know what you want / It may take you years to find out / You don’t know what you need / Something that may never come to you”. This made sense to my 20 year-old self. Alberto and I went to Tramps that summer and saw Face to Face live. At the end of the show, we went into the street and I smiled as I wrung out my sweat-soaked t-shirt.

When Q-Tip was asked if he was afraid of the ‘sophomore jinx,’ he said, “Sophomore jinx? What the f#ck is that, I’m going to make The Low End Theory.” That confidence comes through on every track. But it was Phife who came into his own on this album. His lyrics and flow go toe to toe with Q-Tip’s. I remember hanging out with friends and performing “Scenario” with each of us swapping verses. Damn, that was fun. For me this album blew their first one, People’s Instinctive Travels and the Paths of Rhythm, out of the water. The arrangements are stripped back, featuring mostly drums, bass, and jazz samples. The horns on “Check the Rhime” are particularly amazing. The simplicity never stunts the creativity. I try to remember that when I approach my own songwriting.

When I was 16 and had just gotten my license, Debut was an appropriate soundtrack to my newfound freedom. At the time I was a house music head, but this album helped open up my musical palette. The opening track, “Human Behavior,” would always make me feel like I was embarking on an adventure. I found the rhythms and melodies odd, but they made perfect sense in the context of the album. I could easily relate to the dance tracks, but then Björk hit me with insane soundscapes and crazy imagery. Confession: there were many times I loudly serenaded a carful of friends with “Violently Happy” immediately followed by “The Anchor Song.” I apologize to those who experienced this. 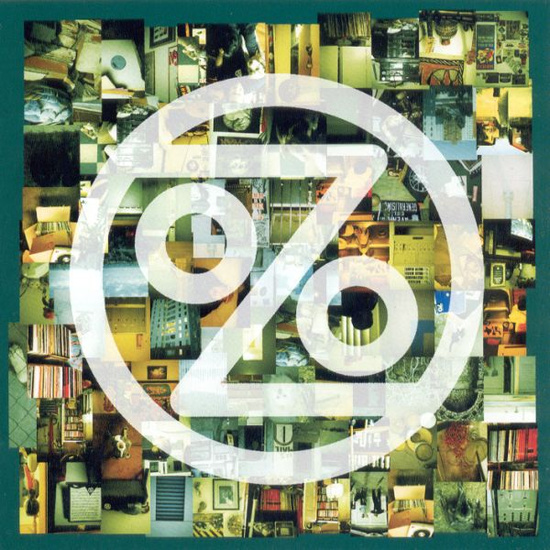 I discovered these guys about 4 years ago and I wish I would’ve known about them sooner. The band describes their music as, “You drive down Sunset Boulevard and turn off your stereo and roll down your windows and all the music that comes out of each and every different car, whether it’s salsa, cumbia, merengue, or hip hop, funk or whatever, it’s that crazy blend that’s going on between that cacophony of sound is Ozomatli, y’know?” Well, I definitely know because that’s how my brain works. Every time I approach music, I don’t hear one thing. I hear all different genres that vie for my attention. Many of Ozamatli’s other albums are great, but their debut stands out for me. It makes me happy, makes me want to dance, and encourages my songwriting voice.