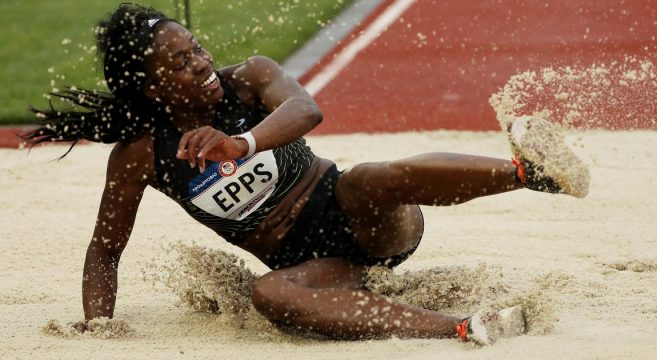 We’re highlighting all the New Jersey Olympians this summer because there are so many to watch for.  Christina Epps will represent the United States in the Triple Jump in Rio.  Two of the three women triple jumpers are from New Jersey. Christina will joined by Mount Olive native Keturah Orji in Rio.

Epps grew up in Morristown, New Jersey and graduated from Morristown High School in 2009. Christina competed at the 2015 World Championships in Beijing without qualifying for the final. Her personal bests in the event are 14.09 metres outdoors and 13.16 metres indoors. Christina graduated from Coppin State in 2013 and now competes for the adidas Garden State Track Club. Coppin State recently brought her back to campus to celebrate her Olympic berth. She’s the first Coppin State athlete to compete at the Olympics!

[photo via baltimoresun.com and bio info via wikipedia.org]