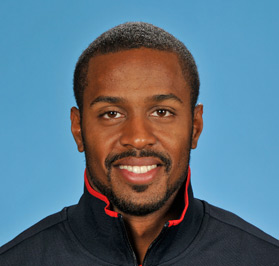 We’re highlighting all the New Jersey Olympians this summer because there are so many to watch for. Jeff Porter is a hurdler from Somerset who will represent the United States this year in Rio.

He attended Franklin High School and was the top American junior hurdler in 2002. He won the 110 m hurdles at the 2001 AAU Junior Olympics. He gained an athletic scholarship to study kinesiology at the University of Michigan. He made headlines in 2012 by dramatically diving toward the finish line in order to make the London Olympics.  But, he’s probably used to his brother making the headlines.  His brother, Joe Porter, played in the NFL from 2006 to 2011, most recently as an Oakland Raiders cornerback. World-class athletes really run in that family!

In his freshman indoor season at Michigan he won the Big Ten Conference title in the 60-meter hurdles and he was runner-up at that season’s Big Ten Outdoor meet. Porter came second at the 2006 Big Ten Indoor meet then placed fourth in the NCAA Indoor Championship with a personal record run of 7.77 seconds. He won 110 m hurdles which got his first Big Ten Outdoor title. He made his debut at the USA Outdoor Track and Field Championships that year and reached the semi-finals. He competed all over the world for a few years and then in the 2012 United States Olympic Trials, he got the third Olympic spot by running a personal record time of 13.08 seconds and by diving toward the finish line past other competitors. He was a surprise addition to the American Olympic squad, beating highly ranked hurdlers including David Oliver.

At the 2016 United States Olympic Trials, Porter ran 13.21 and came in third. He ran nearly the same time as second place Ronnie Ash (another hurdler from NJ!), separated by one one thousandth of a second.

Track and field events being August 12th and continue through August 21st.