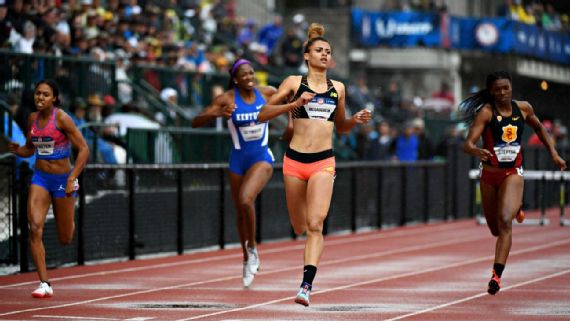 We’re highlighting all the New Jersey Olympians this summer because there are so many to watch for. Sydney McLaughlin is a hurdler from Dunellen and will compete for the U.S. in Rio this year.

McLaughlin is the youngest athlete to make the American Olympic track and field team since Carol Lewis and Denean Howard qualified for the boycotted Moscow Olympics in 1980! McLaughlin belongs to an athletic family. Her father Willie was a semi-finalist in the 400 meters at the 1984 Olympic Trials, her mother Mary was a runner in high school, and her older brother Taylor is also a sprinter and hurdler. The Dunellen resident is a member of the class of 2017 at Union Catholic Regional High School in Scotch Plains, and has been successful academically. McLaughlin took up running at an early age, following Taylor and their older sister Morgan.

McLaughlin placed a close second behind Shamier Little in the 400-meter hurdles at the national junior (under-20) championships in 2014; her time of 55.63 was a national high school freshman record and a world age-14 best. She would have qualified to represent the United States at the 2014 IAAF World Junior Championships, but was a year too young to be eligible.

McLaughlin improved her 400-meter hurdles best to 55.28 at the 2015 national youth trials; the time was an age 15 world best, and ranked second on the all-time world youth list behind Leslie Maxie’s world youth best (and national high school record) of 55.20 set in 1984. She qualified for the 2015 IAAF World Youth Championships in Cali, Colombia, where she won gold in 55.94; she finished the year as the world youth and junior leader in the event.

McLaughlin won the 400-meter hurdles in 54.46 at the 2016 New Balance national outdoor high school championships; the time broke Maxie’s prep record and world youth best, as well as Lashinda Demus’s American junior record of 54.70. In addition, she ran on Union Catholic’s team in the Swedish medley relay, running a fast 50.93 split for 400 meters as the team set a new high school record of 2:07.99. McLaughlin won the USATF junior championship in 54.54 the following week; in recognition of her accomplishments, she was named Gatorade National Girls Athlete of the Year.

McLaughlin won her heat (55.46) and semi-final (55.23) in the 400-meter hurdles at the 2016 United States Olympic Trials. In the final she placed third in 54.15, setting a new world youth best and world junior record and qualifying for the Olympics in Rio de Janeiro.

[photo via ESPN.go.com and bio info via wikipedia.org]