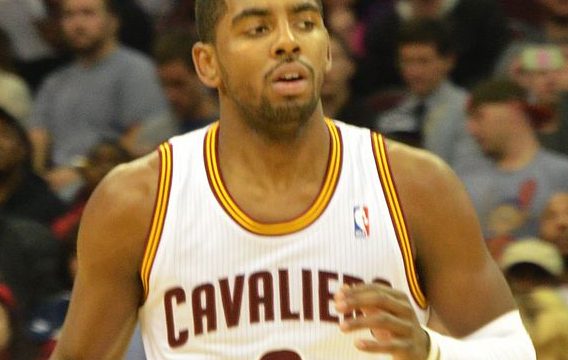 We’re highlighting all the New Jersey Olympians this summer because there are so many to watch for. Kyrie Irving will represent the United States in Rio on the U.S. Men’s Basketball team.

Kyrie was born in Melbourne, Australia, but grew up in West Orange. His parents are American so he has dual citizenship in Australia and the United States.  His father, Drederick, played college basketball at Boston University and then moved to Australia to play professionally for the Bulleen Boomers. Irving lived in the Melbourne suburb of Kew before relocating to the United States when he was two years old. Irving’s mother, Elizabeth, died from an illness when he was four, so Drederick raised him with the help of Irving’s aunts.

Kyrie played for Montclair Kimberley Academy his freshman and sophomore years in high school. He averaged 26.5 points, 10.3 assists, 4.8 rebounds and 3.6 steals and became only the school’s 2nd 1,000 point scorer. In his sophomore year, he led MKA to its first New Jersey Prep ‘B’ state title. After that year, he transferred to St. Patrick High School because he felt he needed a bigger challenge. He had to sit out the first 30 days of St. Patrick’s season due to the transfer. In his first season at St. Patrick, Irving averaged 17.0 ppg., 5.0 rpg., 6.0 apg. and 2.0 spg. He also led his team to their third New Jersey Tournament of Champions title in four years. In August 2009, he played in the Nike Global Challenge in which he led the USA East to the tournament title. He was the MVP with 21.3 ppg. and 4.3 apg. The following year, St. Patrick was banned from the state tournament for holding practice prior to the permitted start of the winter sports season. Despite being banned from the state tournament, St. Patrick went 24-3 and won the Union County Tournament championship. Kyrie finished his senior year with 24.0 ppg, 5.0 rpg. and 7.0 apg.

Irving committed to Duke on October 22, 2009, in a television broadcast on ESPNU. Irving played with Duke during the 2010–11 basketball season under the guidance of head coach Mike Krzyzewski. Through the first eight games of the season, he averaged 17.4 points per game on 53.2% shooting, 5.1 assists, 3.8 rebounds and 1.5 steals.

He was quickly making his case for NCAA Freshman of the Year but in Duke’s 9th game of the season, Irving suffered a severe ligament injury in his right big toe that sidelined him indefinitely. On March 17, the day before Duke played Hampton in the first round of the NCAA tournament, it was revealed that Irving would return for his first game since December 4. Duke advanced to the Sweet Sixteen of the NCAA Tournament but fell to Arizona. Irving scored 28 points in what turned out to be his last game for Duke.

Kyrie was selected with the first overall pick in the 2011 NBA draft by the Cavaliers. Irving has achieved a number of accolades, including the 2011–12 NBA Rookie of the Year, 2014 NBA All-Star Game MVP, and an NBA championship in 2016.

U.S. Men’s Basketball will begin on August 6th and medals will be awarded on August 21st.