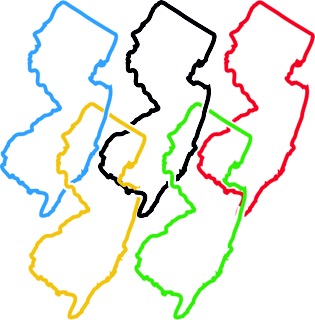 We have all binged on Olympics on television over the last two weeks and they came to a close this weekend. Now it’s time to see how all our New Jersey Olympians fared.

We really raked in the medals as a state!  We got four gold medals, three silver medals and one bronze medal.

Laurie Hernandez of Old Bridge helped her Women’s Gymnastics team win the team gold medal. She competed in the Vault, Floor Exercise and Balance Beam. Then, she went on to win an individual silver medal in the Balance Beam.

Ibthihaj and Dagmara also fenced on the Women’s Sabre Team and won the bronze medal!

Connor Jaeger, Fair Haven – Swimming freestyle. Connor won the silver medal in the 1500m Freestyle competition! He came in fifth in the 400m Freestyle finals earlier in the week.

Kelsi Worrell, Westhampton – Swimming butterfly. Kelsi came in fourth in her Semifinal which wasn’t enough to get her to the finals. She missed the finals but just .03 seconds!

Frank Molinaro, Barnegat – Wrestling 65kg. Frank lost in the quarterfinals to Toghrul Asgarov of Azerbaijan who went on to win the silver medal.

Jordan Burroughs, Sicklerville – Wrestling 74kg. Jordan lost a heart-breaking match in the quarterfinals to Aniuar Geduev of Russia who would later win the silver medal.

Sam Ojserkis, Linwood and Steve Kasprzyk, Cinnaminson – Rowing Men’s Eight. Sam and Steve helped the US to a fourth place finish in the finals.

Colton Brown, Piscataway – Judo -90kg. Colton lost to Alexandre Iddir of France in the Round of 16.

Robby Andrews, Manalapan – Track 1500m. Unfortunately, Robby was disqualified in the semifinals for stepping outside the track lanes on the final stretch of the race.

Ronnie Ash, Passaic – 110m Hurdles.  Unfortunately, Ronnie was disqualified in the finals for intentionally knocking down his last hurdle.

Jeff Porter, Somerset – 110m Hurdles. Jeff came in last in his semifinals heat and did not move on to the finals.

Christina Epps, Morristown – Triple Jump. Christina placed 15th in the qualification round and that did not allow her to move on to the finals.

Keturah Orji, Mount Olive – Triple Jump. Keturah made a new American Record jump but that only placed her Fourth in the finals.

English Gardner, Voorhees Township – Track 100m. English came in 7th in the finals for the 100m.  She also competed in the Women’s 4x100m relay and won a gold medal!

Sydney McLaughlin, Dunellen – Track 400m hurdles. Sydney placed 17th overall in the semifinals which was not high enough to make it to the finals.

Ajeé Wilson, Neptune Township – Track 800m. Ajeé placed 12th in the semifinals which did not allow her to make the finals.

Tobin Heath, Basking Ridge and Carli Lloyd, Delran – Soccer. Shockingly, the US team was eliminated in the quarterfinals by Sweden.