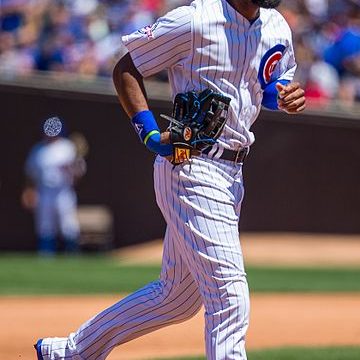 Jason Heyward was born in Ridgewood on August 9, 1989. His parents, Eugene and Laura, met at Dartmouth University and moved to New Jersey to start their family. Eugene played basketball and majored in engineering and Laura studied French at Dartmouth. Eugene’s uncle, Kenny Washington, played basketball for two John Wooden-led NCAA championship UCLA teams in 1964 and 1965. Jason has one younger brother, Jacob, who attends the University of Miami and plans to major within the school of communication and also plays baseball for the Hurricanes. Soon after Jason was born, the family moved to the Atlanta area where he played high school baseball. [bio info and photo via Wikipedia]

The Cubs signed Heyward to a $184 million, eight-year contract this past offseason. They benched him in the first game of the World Series but he got in the second game on Wednesday night.  Good luck, Jason!