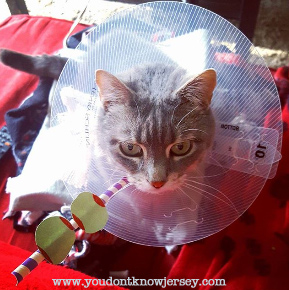 Picture(s) of the Week – The Many Cones of Iris

Last week we gave you a little hint of the fun we had with Iris the Cat’s post-surgery cone.  She had cancer in some of her mammary glands and they needed to be removed before they spread. Now that she’s out of the cone and on the road to recovery we thought we’d share all the projects we worked on with her.

It all started with the chip bowl.  My Facebook friends hated this.  I thought it was the best one after we were all done with our ideas.  I think everyone thought we were leaving her like this.  She had chips in there for less than fifteen seconds. 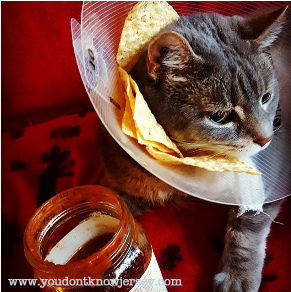 Next up was the martini cone. She was still being patient with these projects at this point. She would grow less patient as we went along.

Ed wanted to share a cone with her the next day.  It was hard making a human cone! 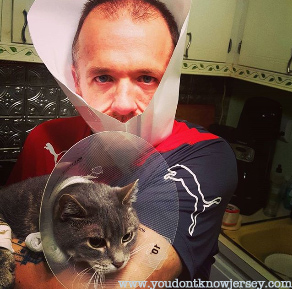 Suddenly, our friends were getting in on the projects! Lareé Cisco made this Contact movie poster for us.  We began calling it the Cont-cat poster. 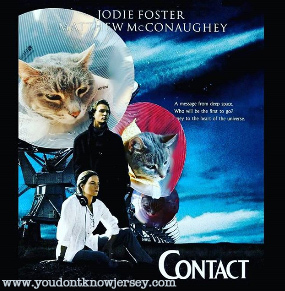 Then YDKJ contributor Ed Raso got in on it and made us Claws.  This one even incorporated Jack.  Jack however was terrified of Iris in the cone and we barely saw him for a week once she came home from surgery. 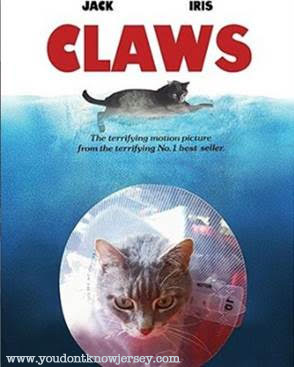 I couldn’t make her into an actual Iris since that’s not a cone-shaped flower but she certainly was adorable as a daisy. You can see the quiet rage in her eyes.  She hated when our artwork blocked her view. 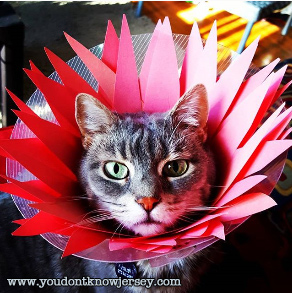 This one was even worse for her than the flower.  It was the beginning of the Big East conference tournaments for men’s and women’s basketball and we wanted her to root for DePaul and Seton Hall. I basically got a picture of her in it and then immediately had to remove it. 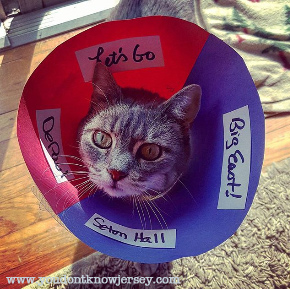 This one she was happy with and it was extra sweet since it matched her pretty personality. I made her a nice little spring bonnet.  Once she got one of the ribbons loose, I had to take it all off in case she got too rambunctious playing with it.  She was still healing, after all! 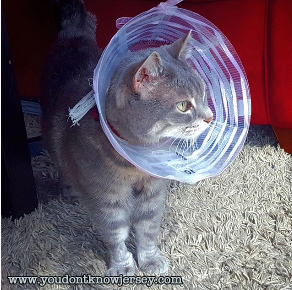 This was an homage to one of New Jersey’s finest citizens.  Iris as Thomas Edison’s phonograph. 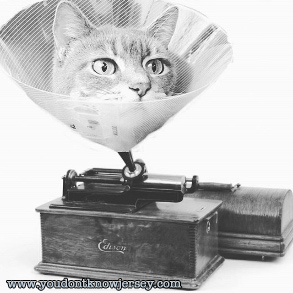 International Women’s Day coincided with her last full day with the cone.  Luckily, she didn’t hate this one too much, either. 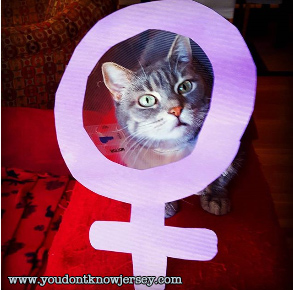 She got the clean bill of health from her surgeon, Dr. Kelly Johnson at AERA Emergency and Specialty Vetrinary Hospital Group in Fairfield, soon after this and we got to give her some time away from the cone. She starts chemotherapy soon at AERA, so she’s not out of the woods completely but we’re hoping that she’ll be with us and entertaining you on Instagram as part of the #YDKJCats for a long time.

Follow us on Instagram to see our picture journey throughout the Garden State… and more cat pictures!