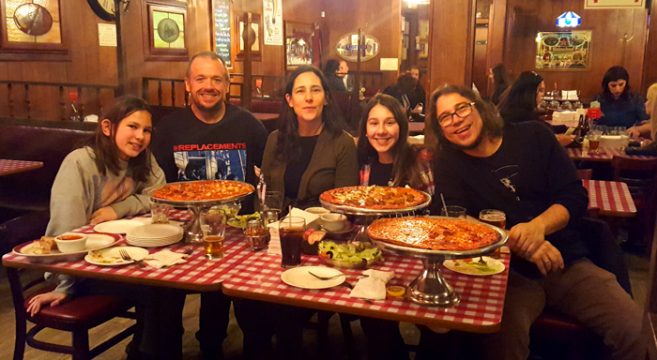 We’ve been taking bands out for pizza to meld our two loves: New Jersey food and New Jersey music.  These Pizza with the Band outings have been insightful and fun for us and hopefully enjoyable for the bands too.  This week we met up with the amazing RockNRoll HiFives at Kinchley’s Tavern in Ramsey. 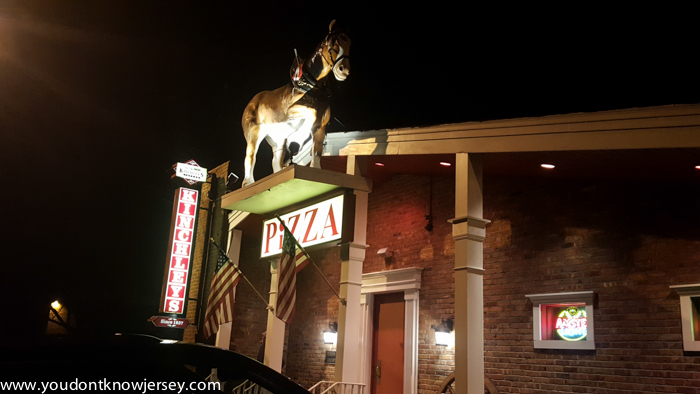 If you haven’t seen the HiFives live, you have a few chances over the next few weeks here in New Jersey. They’re playing the Clash Bar in Clifton on Saturday, the 11th, and Convention Hall in Asbury Park on March 25th for CoolDad Music’s 5th Anniversary show. If you’re in Virginia or North Carolina, you even have a chance to see them on their Spring Break tour in April. 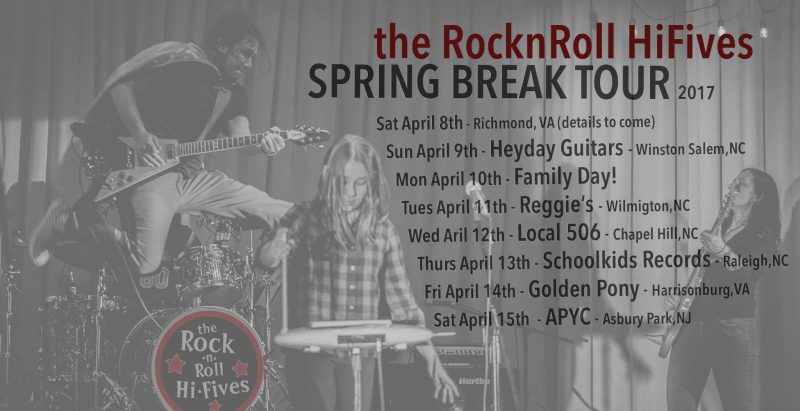 Notice anything about this picture that reflects their unique lineup?  Yep, they’re an entire family in a band together and they really rock.  This is no Partridge Family though. They don’t do kiddie songs and all four members get equal say in song selection and writing credits. Check out their music on Bandcamp.

The band got started when son Evren got a drum set as a gift.  He and dad Joe jammed together for a while on guitar and drums.  It wasn’t long before daughter Eilee joined in on vocals. Finally, mom Gloree was feeling left out because the rest of the family was having so much fun.  The band’s lineup was solidified when Joe and the kids bought her a bass so she could join the band. Joe and Gloree both grew up as children of immigrant parents and were discouraged from pursuing musical interests. Joe bucked that advice and had a guitar anyway throughout his teen years.  Gloree heeded her parents’ advice and didn’t play an instrument until her bass showed up from Joe and her kids.  Gloree had 30 days to return the bass (the store’s return policy) or decide she liked it.  Well, she definitely liked it because within just a few months they were asked to play a show in a Jersey City cemetery with their friends from the band Overlake. Eilee even added a theremin to the band which I love.  Joe wanted to add a fuller sound to the group and Eilee interested in playing something on stage.  She’s great at it and it adds a neat 60’s vibe to their sound. She’s also thinking about trying out a guitar, too.

They looked for a fuller sounds and we wanted to add some appetizers to our order for a fuller meal.  We started off with salad, fried ravioli and garlic bread parmesan. 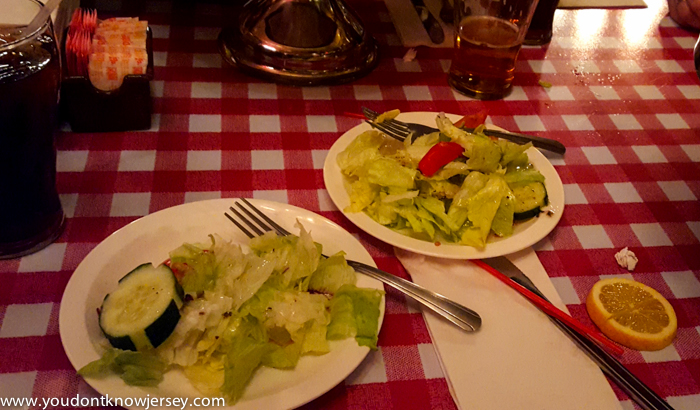 The fried raviolis were recommended to us from an Instagram friend and, she was right, they were fantastic.  They were very crispy on the outside and cheesy and creamy on the inside.  We could have easily polished those off between just the two of us. 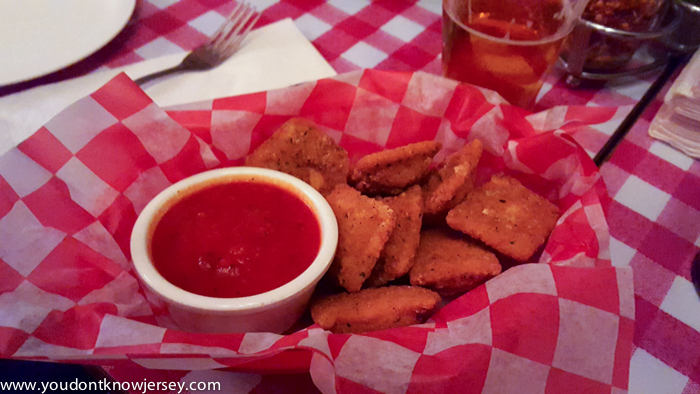 Our server recommended the garlic bread parmesan.  It was also very good. It’s made on fresh homemade bread and had lots of gooey cheese without being too greasy. 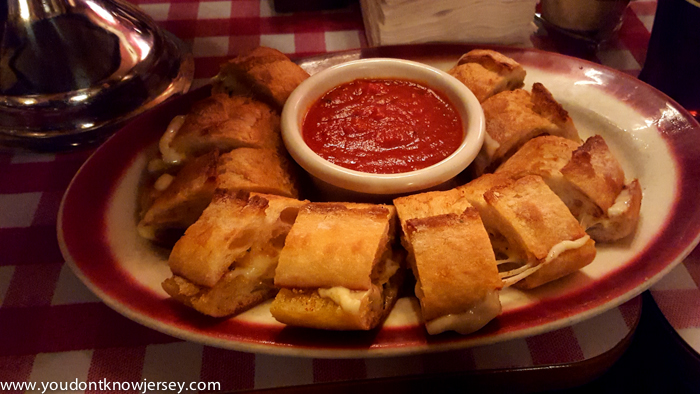 We asked the band about going out on the road and we found out that they bought an RV to tour around with.  The family also recently watched Spinal Tap so we asked if they had any Spinal Tap moments on the road.  Both their stories were centered around the RV.  They said that one of the RV parks they stayed in one night had bags of dog poop hanging all over the campsite and it smelled terrible.  They complained about it in the morning and it turned out that there was a dog show nearby and the campers all had dogs with them.  The RV park owners weren’t too happy to hear about the poop bags hanging all over! The second story involved a parking incident where a rented moving van side-swiped them while Joe was using the RV bathroom.  He was jostled around pretty good in there before running out to confront the driver who had been stopped by Gloree.  Luckily, the RV was sturdy and wasn’t damaged much at all.

Once the pizza came, we all settled down to our different topping choices.  We got three pies with half and half toppings so there were six options which we individually got to order. Family democracy is alive and well! We had mushrooms and meatballs on the first pie. 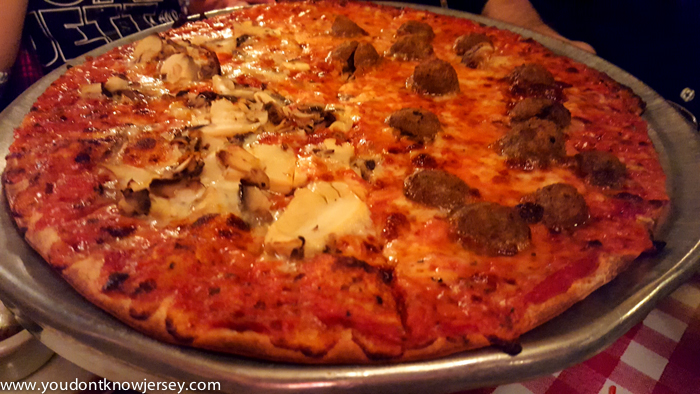 There were chicken cutlets and sausages on the next pie. 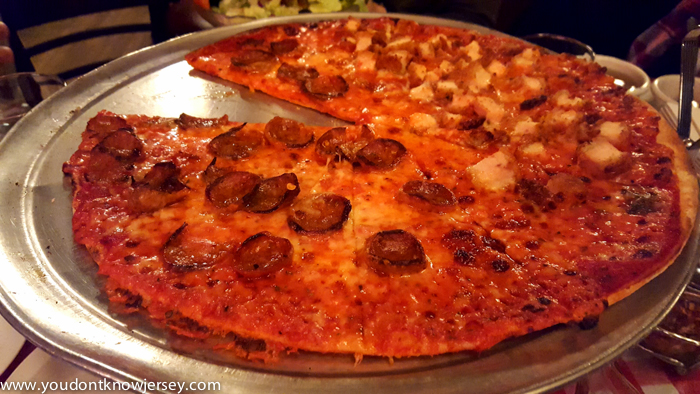 And, plain cheese and bacon on the third pie. 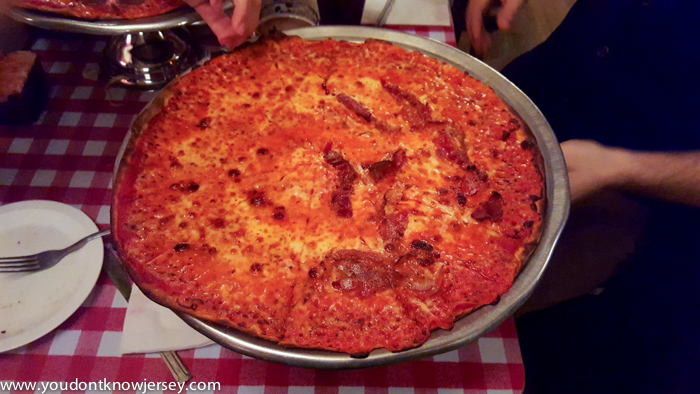 You can see how thin the crust is on these pizzas. It was pretty easy to devour many slices of pizza even though we’d had lots of appetizers. The sauce was pretty spicy and the cheese was layered with a light hand.  It was really unique and really good!

Despite being a rock and roll band, there were no food fights or TVs thrown through the window. On stage, it’s entirely different.  Joe jumps around during the entire set and especially loves to leap off Evren’s drum set.  Gloree said she doesn’t worry about him jumping around like that all night because he’s been like that his whole life.  She told us that he used to run up to the front of his childhood home in Union City, run up the facade and end with a backflip back onto the sidewalk. Eilee said that she doesn’t mind his leaps either until he gets really going and he starts sweating on her. Sound like a fun band to watch?  You’re getting the idea now!

An unusual coincidence came up while we were talking about Gloree’s childhood.  Ed and Gloree attended the same Junior High and High School! They were both in Christopher Columbus Junior High and later attended Clifton High School with Ed two years ahead.

Check out all the pictures below from our night with the RockNRoll HiFives at Kinchley’s Tavern and join us at one of their local shows sometime this month.  We guarantee you’ll have a great time! 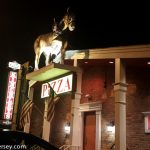 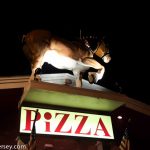 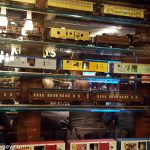 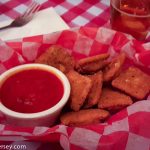 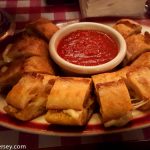 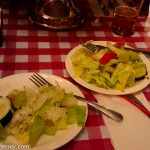 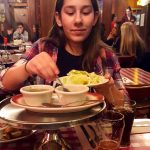 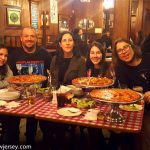 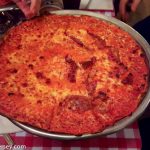 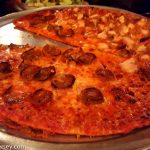 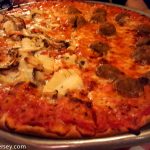 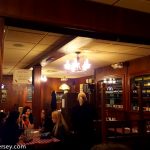 Pin It
Previous post:
Where’s YDKJ This Week? – March 10th–March 16th Next Post:
Picture(s) of the Week – The Many Cones of Iris