Since forming last year, Asbury Park’s The Burns have been one of the scene’s most prolific acts, carving out a place for themselves while still managing to stand apart from their peers: a serious band of serious musicians that doesn’t ever take itself so seriously. They crafted an album (2017’s Splenderson) of good-time, back porch singalongs that – when you listen closely – reveal themselves in mature, insightful, and occasionally-surprising ways. And now they’re back with a new single and a new video. 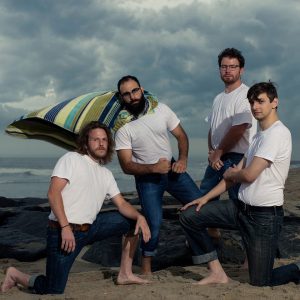 Frontman Joey Henderson sings of yet another breakup; another hard conversation; another desire to “just be friends,” and the people in the room act as though they’ve all heard this line more than once before. Two people play Uno. Someone reads a book. Two more play chess. But The Burns play on, bringing their special blend of casual reliability with them.

We’ve all been there. Chances are we’ll be there again. And if “Wolves” is any indication, whatever The Burns have up their sleeve next will be along for the ride, too; offering us the reassuring pat on the shoulder, the rally beer, or just the right amount of distraction as we keep howling away!