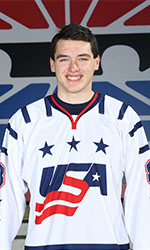 Jack Wallace was born in Ridgewood and lives in Franklin Lakes.  He will compete in Sled Hockey (sometimes known as Sledge Hockey) for the USA.

Wallace lost part of his right leg in a boating accident in 2008 and was introduced to the sport in 2009 while attending Camp No Limits in Maine. He went on to join a local New Jersey team and later attended the USA Hockey Sled Select Camp from 2010-2016 and participated on the U.S. National Development Sled Hockey Team from 2013-2016. He made his U.S. National Team debut in 2016.

His parents are John and Barbara Wallace and he has three siblings, Colleen, Matt and Mike. He lists his favorite hockey memory is the 1980 Miracle on Ice.  His favorite food is buffalo chicken pizza and his idol is Martin Brodeur.  His dream job would be to become a pilot and his hobbies include skiing, playing guitar, camping, woodworking, golfing and boating. He plans to graduate from the College of New Jersey this year with a degree in Biomedical Engineering.