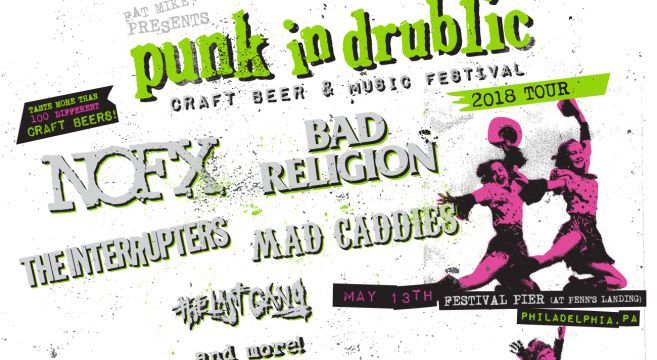 Punk in Drublic Coming to Philadelphia

“Possessions never meant anything to me. I’m not crazy! Well that’s not true, I’ve got a bed and a guitar…” – Linoleum (NOFX – Punk in Drublic)

When it comes to bands that represent the punk lifestyle, there are few who would argue with the band NOFX. Even taking away Fat Mike’s crazy antics on stage, his “Cokie the Clown” persona, and the fact that he’s officially more than a half century old; the frontman of NOFX still sticks to the sounds and mentality that made them the band they started back in 1983. 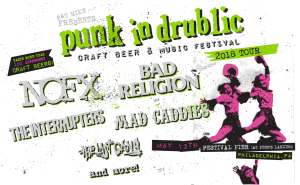 Punk in Drublic, named after the 1994 album of the same name, consists of a lineup that would put a smile on the face of anyone nostalgic for the old days of Warped Tour. NOFX, Bad Religion, The Interrupters, Mad Caddies, The Last Gang, and more will be sharing the stage at Festival Pier in Philadelphia on May 13th. There are additional stops planned for Texas, Virginia and Massachusetts.

This high energy concert pairs together punk and ska bands that span roughly 40 years with a full craft beer garden where you can taste over 100 brews! Their “Very Unimportant Person Package” includes added benefits such as:

Tickets are on sale and can be found on the official Punk in Drublic Festival website.

Pin It
Previous post:
Helping Create an Artificial Reef in the Delaware Bay with the American Littoral Society Next Post:
Ticket Giveaway – Knuckle Puck at White Eagle Hall on March 22

about the author: Josh Hershkovitz

Frontman of NJ ska band Backyard Superheroes and one half of Fake Famous Photography. One way or another, I can usually be found in front of a stage or taking pictures of my dogs. Huge believer in the NJ Local Music Scene.