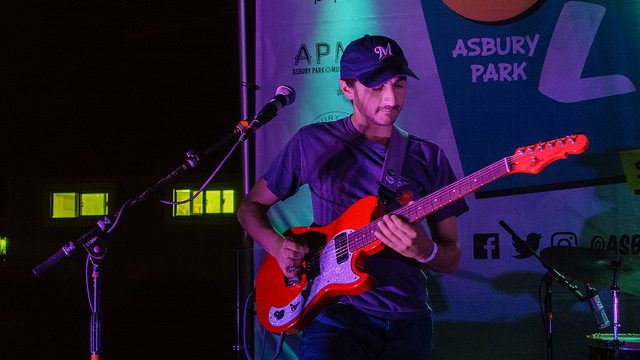 I first came to know Lucas Dalakian when he was the guitarist for New Brunswick’s incredible indie band ROMP. I attended many a sweaty basement show enjoying their lively sets and infectious tunes. Sadly ROMP disbanded in 2016 and Dalakian focused his attention on his other band Ragged Lines. 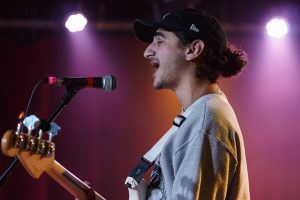 Now, cut to last summer when the local music community learned that acclaimed band dollys had unfortunately broken up.  Drummer/lead singer Natalie Newbold started a new band soon after. Well Wisher was born and when she set to looking for a guitarist for the new Asbury Park band, Lucas got the call.

“I love how Lucas is a guitar player who is always thinking about the songs first and foremost,” Newbold told me recently. “He’s also a really great friend and person.”

Along with bassist Lynsey Vandenberg and drummer Tony D’Arcangelo the band released a two song EP last Autumn that has hinted at the awesomeness we can look forward to. Well Wisher’s upcoming full-length debut album, recorded with Erik Kase Romero, is one of the most anticipated records of 2018. Not too much pressure there.

You can catch Well Wisher this Friday at Stosh’s in Fair Lawn at a free show You Don’t Know Jersey is putting on along with our friends at Mint 400 Records and Sniffling Indie Kids. Joining Well Wisher at Stosh’s is Pioneer the Eel, Secretary Legs, Rosey Bengal and Trim Tabs.  Info here.

Ed asked me a few months ago to make this list and it’s been in the back of my mind since then, and to be honest I’ve been a little stressed to narrow this list down to just 10. I would probably change my list tomorrow if you asked me. I decided to make it easier to divide this into 2 lists. 5 classic albums that I love, and 5 more recent albums that I’ve been spinning a lot in the past few years.

Continuum is my top album ever, and it’s not close, this is the only one I never considered taking off the list. My best friend Carter bought me this CD for my 16th birthday, and I was instantly a hooked on John Mayer. My 2 favorites from this album are “Dreaming with a Broken Heart” and “I Don’t Trust Myself”, but aside from the single (“Waiting on the World to Change”) and the Cover (“Bold as Love”) all these songs are some of my favorites of all time. John Mayer changed my guitar playing style a lot, much to the chagrin of my punk friends. Natalie was nice enough to listen to the whole thing straight through in a 5am car ride back from a gig recently, I think she low key didn’t hate it. 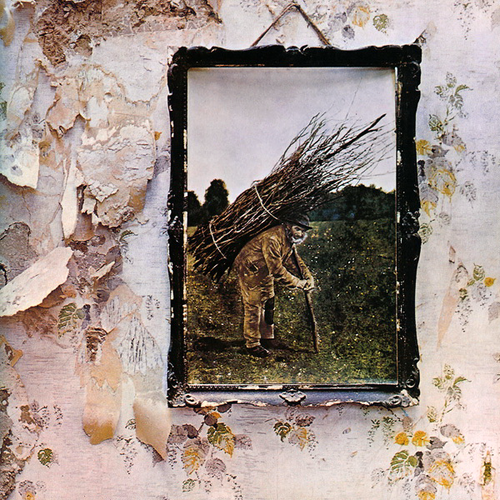 Led Zeppelin is my favorite band of all time, and this is their best album, it’s that simple. Drums are super important to me, and John Bonham is the best to ever lace ‘em up. I was also super influenced by How The West Was Won, but I thought this would be a more polished pick. Interesting fact about this record is that IV is not actually the name. Technically the title is the 4 symbols on the cover, selected by each member. “When The Levee Breaks” might be the greatest song of all time, and “Going To California” is a personal favorite as well.

I wanted to represent a hip hop selection on this list, since rap music is so important to me. This doesn’t have my favorite songs on it, and Kanye isn’t even my favorite hip-hop artist. But as an album, 808s has so much character, and cohesiveness to it, it really stands out to me. I really appreciate Mr. West’s practice of limiting his tools to create a record that has one sound. I’m a huge believer in reduction to shape creativity. “Coldest Winter” is probably my favorite track, but I don’t really think these songs stand alone as well as some of Kanye’s other songs, this is a complete album. 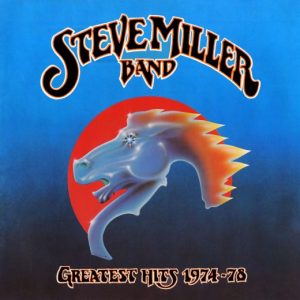 Sorry for putting a greatest hits album on this list, but this record has had such an effect on me. This is the CD my parents would play in the car over and over, and I stole from them has soon as I had a portable Walkman. “Swingtown” and “Take The Money and Run” are my favorites. Light-Rock forever.

This is probably the most kick-ass record of all time. Just raw emotion, track after track. I got into this album later in life, but I’ve stolen a lot of inspiration for my own riffs from Nevermind. My 2 favorites on this record are the all time energy song “Breed” and the rambunctious “Territorial Pissings”.

These records have been such a mainstay in my life since I first heard them a year ago. I don’t even consider these to be Manchester’s best work, but for some reason the songs just do so much, in both of their forms, that they would probably be my top desert island pick. My favorite on HOPE is “Top Notch” and my favorite on COPE is “Every Stone”. “Girl Harbor” and “Choose You” are fire on both, and “Cope” is a sick live song for the band. These albums rip, probably moving into all time favorites tomorrow. 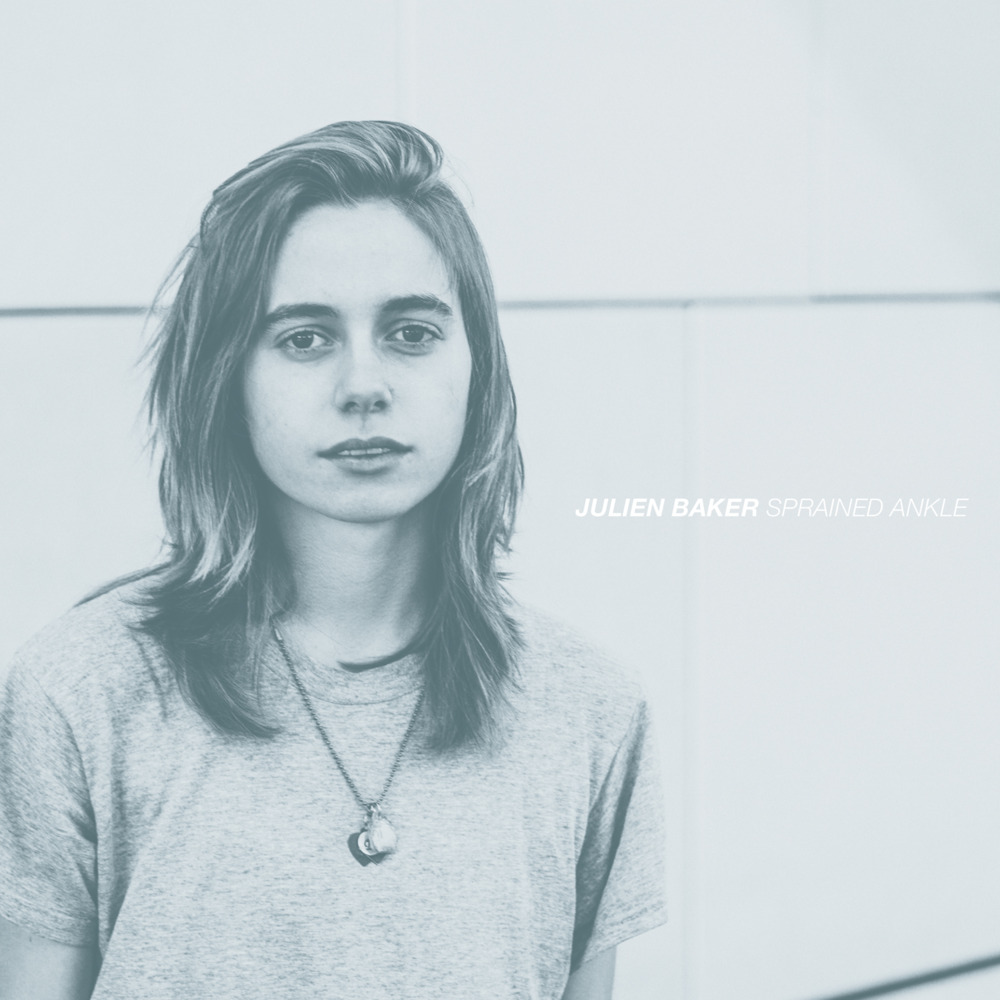 As much as music is a part of my life, it defines me. I’ve found moments of sadness, mostly through death, that I can’t even stomach listening to anything at all. Once I found this record, this is the only thing I can listen to in those moments. “Rejoice” is by far my favorite, but I listen straight through pretty frequently and it’s all amazing.

My good friend Mike Linardi showed me this record on a ROMP tour once, and it was something we could all agree on, so we played it over and over. Andy Hull is one of the coolest songwriters out there, and I think Kevin Devine harmonizes beautifully with him. Andy Hull’s songwriting on “Pyotr” is insane, look it up if you can. He alternates verses between a Czar and a dead man he decapitated for having an affair with his wife. Best tracks to me are “42” and “Lost Creek”.

I apologize but this record is so great. I’m a big Dave fan, and something about the stripped down set sounds so full. I love how comedic his live set can be, but at the same time, Dave and Tim create a beautifully improvised soundscape I get seeped up in. the best songs here are “Grace is Gone”, “So Damn Lucky”, “Bartender” and “Old Dirt Hill”. 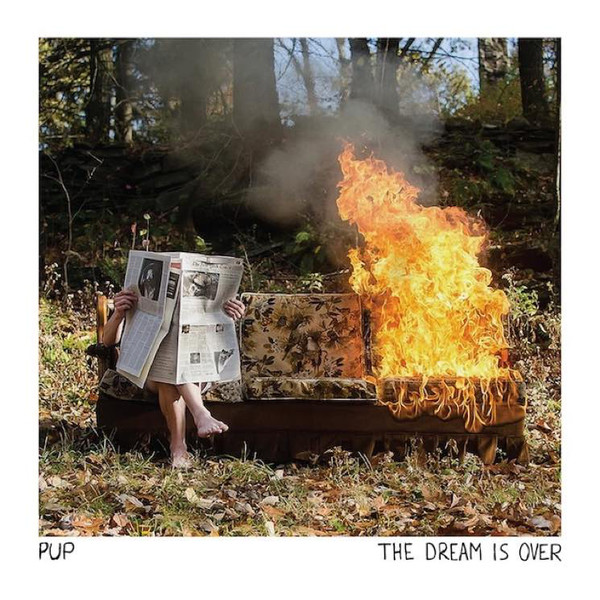 This is a go-to driving record for me. It’s hard to separate this from their debut, but I think the sophomore release for these Canadians has slightly stronger songs. I love “Can’t Win”, “DVP” and the outro on “Familiar Patterns”.

AC/DC – Back in Black

The Front Bottoms – Talon of The Hawk

Kings of Leon – Come Around Sundown

Pin It
Previous post:
Zach LoPresti – The Bearded Face of Beardfest Discusses How He Does It All Next Post:
Foxanne Releases Studio Debut With Haunting EP ‘halfing’