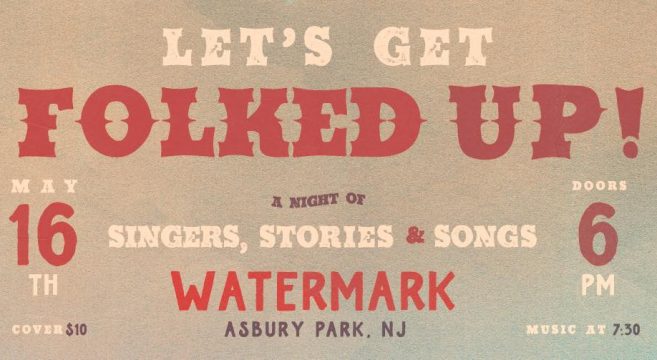 Let’s Get Folked Up! Songwriters in the Round Coming to Watermark in Asbury Park

Folk music has its roots in oral, traditional storytelling that was a way to pass along the history and tales of previous generations. It is both and intimate and enlightening form of expression. It is an enduring genre of music that has seen its popularity rise in recent years. 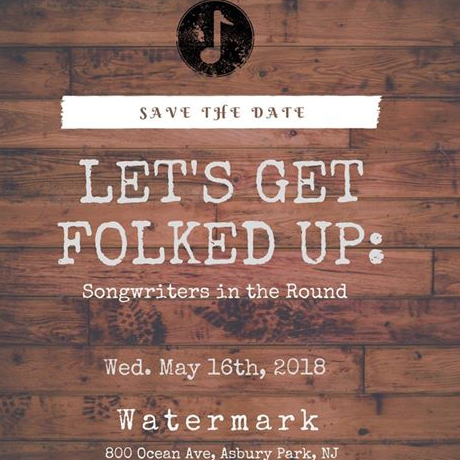 This Wednesday, May 16th, that tradition will be presented at the Watermark in Asbury Park at Let’s Get Folked Up! Songwriters in the Round. Presented by Megan O’Shea, musician Chris Brown and Nashville’s Jo Smith, the line up also includes some of the best local talent including Renee Maskin of Lowlight, J.T. Makoviecki of Jackson Pines, and Matty Carlock.

Megan was kind enough to answer some questions.

First tell us a little about yourself. How did you get involved with the local music scene and 90.5 The Night Brookdale Public Radio?

During my first semester at Brookdale Community College, I joined Brookdale Student Radio and began volunteering at Brookdale Public Radio, 90.5 The Night and just a few months later, Tom Brennan offered me a job at the station! Tom, Rich Robinson and Jeff Raspe have taught me so much and have given so many amazing opportunities over the years.

Congrats on the Asbury Music Award for Top Radio Personality In Support of Live Music! What is it about this particular music community that makes it special?

When I started working there and I started to get involved in community, something became clear very quickly; there is something really special about the Asbury music scene. There are a ton of locals here making original music and it’s unlike anywhere else. There’s no competition here, everyone is constantly pushing each other up and motivating them and helping each with their music. It’s beautiful and I can’t imagine finding that anywhere other than Asbury Park. Thomas Wesley Stern and the Accidental Seabirds were two of the first local bands I met and fell in love with. Jesse Herdman and J.T. Makoviecki have actually taught me a lot about booking and promoting over the years.

On to the event! The show is musicians both telling stories and singing songs. How was this format chosen?

Let’s Get Folked Up was actually Chris and Jo’s idea and they were kind enough to bring me in! I met Jo through a mutal friend, Gwynne Aldean, but I was already a huge fan of hers! She’s a Sirius XM The Highway Find and one of CMT’s Next Woman Of Country! She’s even made her Grand Ole Opry debut and I can’t help but to geek out about anything involving the Opry.

How did you come to know Chris Brown?

I met Chris when he came into the 90.5 The Night and then began to get to know him back when he was working at Bond Street and I basically spent all of my spare time there…sorry, Mom. They had a ton of great ideas and I was just so excited to work on this with them. The Songwriters In The Round style is big in Nashville. We are hoping to bridge a gap between here and Nashville and make sure there is a place for artists, like Jo, to expose their music to our music scene.

Why does folk music strike such an emotional chord with people?

According to Willie Nelson, country music is just three chords and the truth. I think it’s the same for folk. It’s just the unfiltered truth or a story, all I know I’m hooked to it. I can’t speak for the artists playing Let’s Get Folked Up, but I think it’s safe to say they feel the same way.

Do you hope this becomes a series?

We’re hoping this becomes a series! Honestly, I would just love to continue working with Jo and Chris. There are so many artists we hope to see play Let’s Get Folked Up in the future and we’re hoping to branch out to other locations as well. I think we’ve put together the perfect first line up! With Chris Brown, Jo Smith, J.T. Makoviecki, Renee Maskin and Matty Carlock on one stage at the same time, it’s clear we’re going to see something great happen.

Pin It
Previous post:
I Don’t Know What I’m Doing But I Think I Sound Alright Tour 2018 Wrap-Up Next Post:
There’s So Much Left to Do: Reviewing “Sun Day” by The Foes of FERN