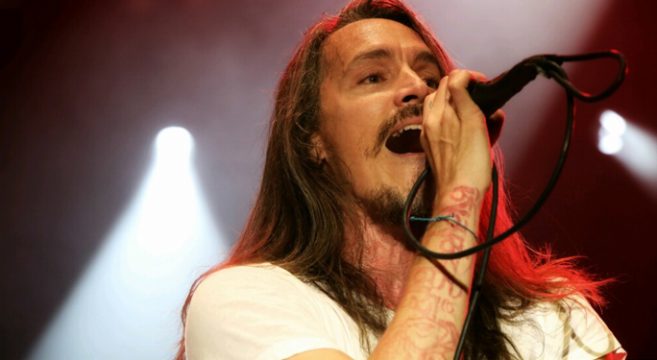 “This is where it all starts.” – Danny Clinch

The inaugural Sea.Hear.Now Festival hit Asbury Park on Saturday and the organizers could not of hoped for better weather to kick off the event. In fact it was so perfect that scores of people showed up for the early free yoga session on the beach. Led by Blissology, the group stretched their bodies and minds while waves gently crashed on the shore. 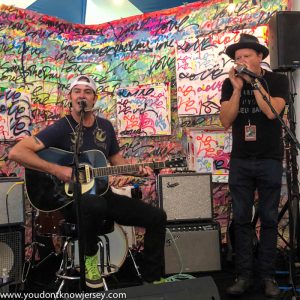 G. Love and Danny Clinch playing in from of G’ Love’s art.

The festival gates opened at 12:30 and our first stop upon entering the grounds was the Transparent Clinch Pop-Up Gallery in Bradley Park where works of art from musicians like Jack Johnson, Nicole Atkins and G. Love were on display. Rock photographer and event co-producer  Danny Clinch welcomed early comers with the words above about Asbury Park while interviewing, and jamming a bit, with G. Love. He asked G. Love about growing up in Avalon and the relationship is between music and surfing. “If I surf, I have a good show that night” Love explained while also mentioning the waves aren’t that great in New Jersey. Clinch playfully took him to task on that statement. In they end they agreed it is all for love. Nice way to begin a day of music, art and surfing. 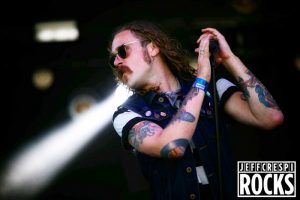 The festival could not have had a better opening act than Asbury Park band The Battery Electric. The bad boys in denim didn’t just open the show but pretty much kicked in the door with their thunderous, fiery brand of rock and roll. The Preservation Hall Jazz Band brought some sweet New Orleans jazz up north and displayed why, over 50 years, in they are the kings of preserving this genre’s history while also keeping it modern. 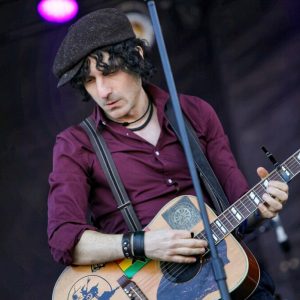 Former D Generation guitarist Jesse Malin rocked the crowd on the Sand Stage including an amazing cover of The Pogues’ “If I Should Fall From Grace With God” while the Tangiers Blues Band, including Danny Clinch on harmonica, thrilled the crowd at the Park Stage.

The festival continued with acts such as the multi-genre SOJA (I think this band had the most t-shirt representation), Carl Broemel, Deer Tick, Frank Turner, and 80s new wave ska band The English Beat who asked the crowd “Are you ready to do some dancing and skanking?” before playing one of my favorites “Too Nice to Talk To.”

Clearly one of the biggest hits of the first day was new wave/punk band Blondie led by Debbie Harry. She immediately proved her legendary bad ass self when she danced on stage wearing a jacket with a cape that read ‘Stop Fucking the Planet’ before launching into “One Way or Another.” The crowd started dancing immediately and did not stop through hits like “Call Me,” “Atomic” and “Rapture.” Harry, who grew up in Hawthorne, told the crowd she used to come to Asbury Park when she was a little girl. The crowd was thrilled to have her back. 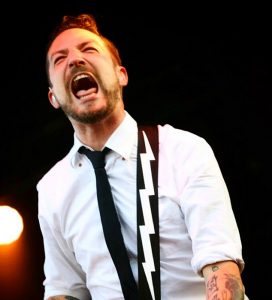 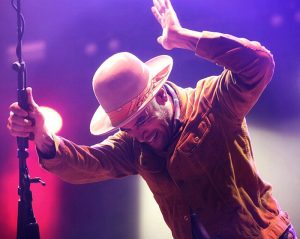 As the sun set over Asbury Park the night’s biggest acts took to the stages including the funky soul of Ben Harper who performed a stirring version of hometown hero Bruce Springsteen’s “Atlantic City” to the rapt crowd, Seattle singer/songwriter Brandi Carlile who moved the crowd with her honest Americana and the intense fun of Highly Suspect. 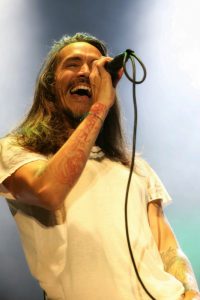 Saturday headliner Incubus took to the stage to a thunderous roar to close out day one. The band always puts on an amazing live show and it was no exception on the beach. The band literally shook the boardwalk as I felt it pulse beneath my feet. In fact so much so that for a few tense seconds the sound went out. 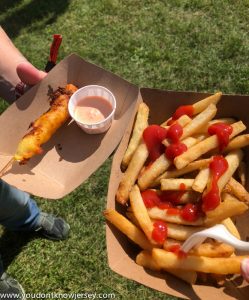 The day has to be considered a great success especially given that it was the inaugural year.  There were some lines for bathrooms and food later in the day but what festival doesn’t have that?  The food was especially good with lots of variety.  We tried a few things over the course of the whole date.  Our favorite was the pork roll, egg and cheese rice balls from Arancini Bros which were a SeaHearNow special item. Crunchy on the outside and soft and salty inside.  The lobster corn dog from Mud City Crab House was also a highlight, a big strip of lobster coated in corn meal batter and deep fried. There’s almost no way that can’t be delicious.  There were rows of food vendors in tents and also a street fair style row of food trucks.  Convention Hall was also open with all their restaurants open.