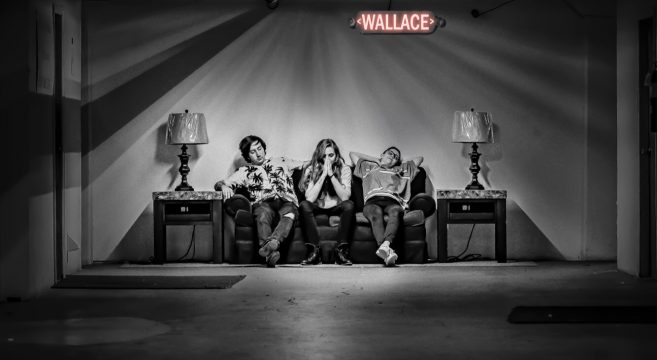 Listening to Wallace for the first time can be jarring, but in the best way. Wallace is a Philadelphia-based trio led by Wallace herself, featuring Hannah Pugh on bass and Adam Figuerelle on drums. This self-titled debut is an impressive collection of bangers, produced by Jon Sambrick at Thornwall Studios in Lancaster over the first half of 2018. Wallace sounds like the 1960s and the 1990s made sweet love and this record is the baby. With harsh yet gripping vocals singing catchy melodies and wildly impressive guitar parts, this album is front-to-back ear candy.

First and foremost, Wallace shreds. It’s hard to overstate just how enjoyable to the guitar parts on this album are. Between the ear-worm riffs, sweeping solos, and occasional acoustic fingerpicking, guitarists–in fact all music appreciators–will certainly find something to enjoy here. And the tone, oh my goodness, the tone! So full and warm, with just the right amount of fuzz. Wallace’s rhythm section shreds just as hard as she does. Pugh and Figuerelle give us bass lines and beats for days, perfectly transitioning between bouncy songs that make you want to dance and huge, heavy pieces that could make you weep. 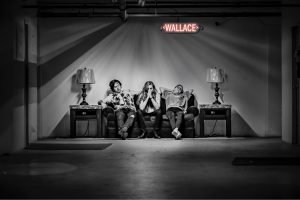 Wallace’s lyrical prowess on this album is more than evident, delivered by a truly unforgettable voice. Wallace sings with a fierce growl that remains thoroughly enjoyable over the whole album. Lyrical themes tie this album together beautifully; Wallace writes about vices, both her own and those of the people around her, and the way they can be harmful even in relationships where people care deeply for one another.

This album comes across as a work that is far more cohesive than many bands are able to pull of on their debut. The first half of the album is whimsical and playful, with a sharp introspective turn on “Interlude,” which carries us through to the end of the album. The same line opens and closes the record: “It’s hard to keep composure when you’re best friends are getting high in the next room,” first delivered with a lightheartedness that could be taken as humor, then finishes spectacularly in an almost-pleading tone with a polyphony of voices. There really isn’t anything about this album that I couldn’t appreciate, and I look forward to seeing what Wallace cooks up for us next.

Pin It
Previous post:
YDKJ Song Premiere: “15 Years” from Fairmont From Upcoming Album ‘We Will Burn That Bridge When We Get to It’ Next Post:
Movie Review – Halloween (2018)