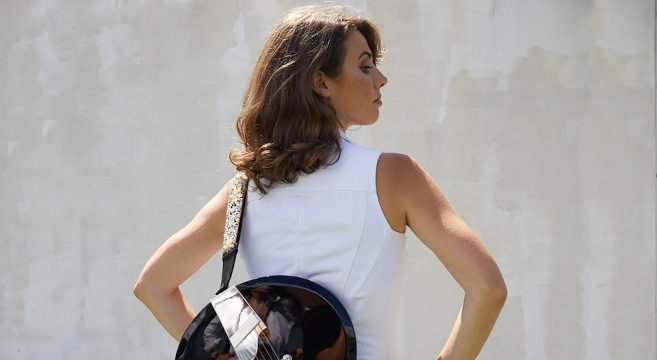 If there is anyone at the moment that personifies the spirit of the current music scene in Asbury Park you’d be hard-pressed to name someone more enthusiastic and supportive than singer/songwriter/multi-instrumentalist Rachel Ana Dobken. A tireless worker, she is either writing music, playing a gig, coming out to a show to support your band or booking acts as musical director at the Danny Clinch Transparent Gallery. With such a busy schedule she stunningly never seems stressed and always performs all these endeavors with an infectious exuberance that is impressive.

Her latest album, When It Happens to You, is an emotionally mature, sophisticated record exploring the ever-changing landscape of love and loss. The cinematic instrumental opener “Intro,” which hints at the depth of what is to come, flows nicely into the mournful “Belief Beneath” about missed opportunities finding Dobken asking “Do you know what you do to me?” to someone clearly not getting the message. Highlights include “Always” with its funky guitar hooks, the jazz influenced “Understand” which allows Dobken to flex her warm vocal range and the gorgeous, uplifting gospel influenced closer “Everybody Wants.” You can tell a lot of thought went into making this album a cohesive piece of work. In this modern age where the single or EP seem to reign, Dobken has made a substantial full length record.

I asked acclaimed photographer and Toms River native Danny Clinch about Dobken and her work at his gallery. “Rachel naturally fit in with us. She was one of the first to play the gallery and she’s an incredible musician who can play a bunch of instruments and has an incredible voice. She is a true connector in the music scene and has brought so many people through the gallery to share and introduce us to their music.” He continued, “The cool thing is that her and I usually end up sitting in with the other musicians, or bands, and having a blast. We couldn’t do it with out her.”

You can catch Dobken live on December 28th at the Wonder Bar in Asbury Park when she plays solo at the first night of What a Wonderful Year 2K18. She will also be back at the Wonder Bar on January 12th supporting Scott Sharrard this time with her full band in tow which promises to be amazing.

You can stream When It Happens to You on Spotify here.

How do you translate the musical education you received at Bard College to the actual career of making music?

I actually owe most of my music career to the amazing Bard College Jazz Department. My professors were extremely open and liberal… I’m not sure this is what it’s like for most people. I know I was extremely really lucky. I really wanted that education, at the very least on a basic level (I had no musical training prior to college except for some playing here and there on my own), and the professors really recognized my talent and did everything they could to give me the tools to succeed. They did a great job at balancing academia and also allowing our own voices and desires musically to flourish. My professor John Esposito used to say, “now I’m giving you all of this and you have to figure out what to do with it and how it will make sense to you.”

Bard was very small so each music class was personal and intimate. I don’t think I ever had more than 10 students in my performances classes. I worked hard when I was there, and spent most of my free time practicing or writing in the music building. The real classes that allowed one to bridge the gap between “academia” and real-life were the performance and composition based classes. I’d say about 80% of my classes had a performance component to them and I use those skills every time I perform. We also had weekly lessons— guitar, drums, voice— for credit so I took well advantage of that. Practice, practice, practice… gotta put in those 10,000 hours. I love Bard for this and I actually miss that practicing structure. I remember telling myself, this is just a starting point and I know the work I put in now will help me later. I think about my professors Erica Lindsay, John Esposito and Carlos Valdez anytime I go to sit at a drum kit and have no idea what I’m going to play until the music starts (every jam session at the Clinch Galley). My vocal teacher Pam Pentony taught me what I know about the voice (although I know I want to get back to lessons) and especially what it means to lead a band as a front-woman/vocalist. That’s the big thing I learned… how to be a band leader, how to communicate what I wish to say sonically. Also, my bandmate Ryan MacLean and I met at Bard and we have been playing together ever since!

Your music stretches across genres including rock, soul, pop and blues. Were you exposed to a lot of different musical styles growing up?

Yes! Absolutely. Growing up my parent’s were both big music fans, my dad in particular was a former musician, so he exposed me to a lot. Steely Dan, The Band, Paul Simon— that was all dad. My mom was more on the Rock and Roll side of things— The Rolling Stones, The Beatles, Billy Joel… she also worked in fashion within the music industry in the 70s so she has a lot of musical love in her blood.  It’s interesting because as soon as I can remember I remember being fascinated and obsessed with music. As a 5 year old my mom gave me “The Best Of Ed Sullivan Show” VHS with The Beatles, The Beach Boys, The Rolling Stones and The Four Seasons and I knew immediately that I was going to be a musician.

As I got older I wanted to know more and my love for the medium always got me through rough times. I loved everything from Incubus to The Band to John Mayer (still do) and went into musical holes diving deep into discographies. In college, studying Jazz made me fall in love over and over again with the genre. It also made me discover more blues especially and soul that I always loved but could delve more into and understand the workings behind (Ray Charles, Otis Redding, Marvin Gaye). The more I learned (especially bebop) the deeper the connection and fascination went. I could relate to its truth. I remember at one point of time at Bard all I was really listening to was jazz. If you asked me what was going on at that time pop culture, what movies or TV people were watching, I had no idea because honestly, I was just listening to and playing music… I’m very grateful for that time.

What is it about the Asbury Park music scene that makes it special?

There’s a true bond and community of love here… people are really willing to help each other out and support one another, at least in my experience. People are so nice and genuine, supportive and accepting of everyone else. This art and music scene here for me is representative of a town founded on acceptance and it is so refreshing. In order for art to thrive you need a community of people who will genuinely support an push it to do so.

What in that local scene would you like to see improved?

Not really sure! I have to think about this one… I think if there was a way to streamline more bands gaining exposure through playing with other bands they haven’t yet played with in the scene, that would really be great and amazing. Can someone make an app for that!?

Does the ability to play so many instruments make it difficult to let someone else play them on a record?

This is a great question… well, shout outs to my incredible band (Dan Haase- bass, Andrew Jackle- drums, Mark Masefield- B3 organ, Ryan MacLean- guitar, Joey Henderson- guitar, Chris Dubrow- bass). I’m so grateful and thankful that they took part in this endeavor with me to play on this album. But, yeah, it made my life a bit more difficult for sure haha. We probably could have had the whole record tracked in 4 days if it wasn’t for my need to play so many of the instruments (some drums, mostly rhythm some lead guitar, piano, vocals)— ha! But, also I wanted to take that time.  It was important for me to be able to play what I did because I saw this record as a means to put forth the best musical representation of myself that I could. In a world and industry where you need to set yourself apart and prove yourself, I wanted to make sure that was the case on this record, especially when it came to playing drums. I don’t get to play drums live for my own stuff all that often, but it’s so close to my heart, and really at the heart of my music…. It’s all about that groove.

Inspiration for the new album?

The album is called When It Happens to You and it actually came to me in a poem.  It’s about that “a-ha” moment in which some sort of live experience clicks for you…how people can tell you time and time again, “oh you’ll know what it means, how it feels, what I’m talking about when it happens to you…”

Who are some of your musical guilty pleasures?

Hmm, so I really don’t listen to pop music, aside from maybe some cheesy 80s or 90s stuff, I don’t really have one!?! So, I’m going to go with my childhood obsession and say The Backstreet Boys. I don’t listen to them at all anymore, but let’s just say if they come on while I’m drunk at a party I’ll start belting out lyrics. But for real- those boys can sing!!!!!!

Copyright, You Don’t Know Jersey, LLC (2010-2020)
Pin It
Previous post:
New Jersey Musicians List Their Top 10 Albums Ever – Deirdre Forrest
Next Post:
Where’s YDKJ Until the End of the Year? – December 21 thru December 31