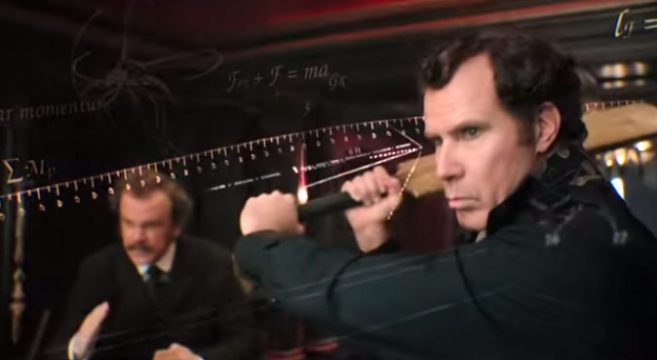 The moment that I saw the trailer for Holmes & Watson, I immediately wanted to see it. Will Ferrell and John C. Reilly made a great team in ‘Step Brothers’ and ‘Talladega Nights’ and a Sherlock Holmes parody is a pretty original idea. Just before seeing it however, I heard that it was getting very bad reviews. I took that into consideration but it did not deter me from seeing the movie. I braced myself for the worst and the real question became, is it really as bad as many of the reviews have been saying?

The answer to that question is yes and no. Yes, the movie is very weak in some respects and there are moments and entire sequences of awkward humor that don’t really work. But at the same time, there are really funny scenes that are executed in goofy and creative ways. I saw a couple people saying that people were walking out of the movie, and I think that is ridiculous. There are films that I wanted to walk out of but this is not one of them. On top of that, the audience that I saw the movie with, which was actually larger than I expected it to be enjoyed the movie very much laughing at much of the humor.

Holmes & Watson is a hit or miss affair and one of the most problematic aspects is that Holmes an Watson are portrayed as being at times intelligent and competent and at others unreasonably stupid for the sake of humor. This makes it difficult to relate to and root for the characters. This type of behavior can be done successfully but a delicate balance must be reached. One of the better scenes in the film takes place when Watson is performing an autopsy with a female doctor that he just met. He is portrayed as being fairly intelligent and a bit of romantic chemistry is generated during a humorous sequence. This is a good scene but later he is shown to be ridiculously dumb when Sherlock is demonstrating a disguise. The intelligence or stupidity of the characters depend on what works for the humor of the scene.

Another problem is Will Ferrell’s performance is a little too eccentric and over the top at times for Sherlock. At times he is the likable Will Ferrell that we all know and love but at others he seems like an egotistical diva genius. On the plus side, the movie has some interesting twists that show he is not as stupid as he appears in some scenes. One of my favorite things about the film is the way it directly parodies the Robert Downey Jr. Sherlock Holmes movies in the way he “pre-visualizes” a course of action by playing out in his head how it will go, kind of like a chess player tries to predict the future of the game multiple moves in advance. It’s an excellent parody and the results are not always what is expected.

This movie feels in some ways like an experiment and the results hadn’t yet been perfected. At one point in the film, it breaks into a musical number. I am not really a musicals person but somehow I actually liked the scene. While watching Holmes & Watson, I got the feeling that some of the talented people making the movie may have realized that there were things that weren’t working but there was obviously no turning back at that point so the only alternative was to commit and follow through as best they could. In the end, I don’t think it’s as bad as some of the reviews have stated. It has a silly, goofy tone and some very funny scenes but it’s by far the weakest of the Ferrell-Reilly team ups and a big disappointment.