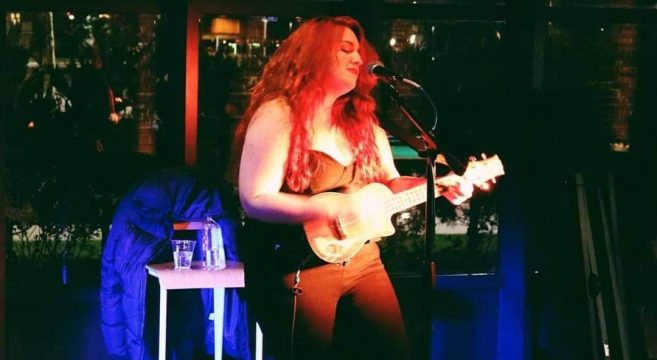 I have always been fascinated by what musicians listen to when they aren’t creating their own music. What music inspires them, what albums they return to again and again—their “desert island” discs. With this in mind I decided to ask some of my favorite New Jersey musicians to name their top 10 favorite albums of all time. Not the albums that they think are “important,” or that have influenced many other artists or ones of technical merit. I wanted to know their very favorite albums that they love just because the records mean the most to them.

Asbury Park singer/songwriter Deirdre Forrest has been making quite a name for herself the past few years performing her heartfelt and emotionally charged music with her band the folk rock duo The May Darlings and now as a solo artist, switching gears to a more indie rock sound that includes touches of soul. She is currently writing new material and working with Grammy nominated producer Steve Greenwell for an EP due out next year. 2019 promises to be a big year for the South Amboy native.

Deirdre recently contributed two songs for the charity holiday album Christmas From Firehouse 2018 released by Firehouse Studios with all proceeds going to Farm Sanctuary. She turns in an intimate and soulful “Santa Baby” with Jimmy Farkus on guitar and then takes on one of my all-time favorite Christmas songs “Fairytale of New York” by The Pogues. It is a wonderful version with Forrest doing Kirsty MacColl proud and Spotswood musician Dave Mooney performing a splendid Shane MacGowen. She will be preforming live at the Christmas Party with Firehouse Studio show at the Chubby Pickle in Highlands on December 21st.

This is such a gorgeous album! It has moments that are both heartbreaking, (“Your Long Journey”), and playful, (“Fortune Teller”). The blend of Alison’s angelic pipes & Robert’s deeper, wizened whine create something truly ethereal. The harmonies, the song choices & the instrumentation are pure perfection. Of course you can’t go wrong with T Bone Burnett at the helm. The production is balanced and lets all the elements shine through the dust of yesteryear. I saw Plant and Krauss on tour supporting this album when it came out and it was just as magical and moving performed live.

Favorite track, “Stick with me Baby”

All Things Must Pass, George Harrison

George Harrison is a hero of mine. He is my favorite Beatle, and my favorite solo artist post-Beatles. His positivity and spirituality radiate from his songs and the incredible way he plays guitar. I’ve turned to this album through the years when going through some hard times, and there’s something soothing about putting this on and getting lost in it. There’s something entrancing about the ebb and flow. His message rings out clear on this record, live in love. This material life is temporary.

Favorite track, “Isn’t it a Pity”

Do I start with the gut-wrenching, whip-smart lyrics or the brooding, dark, smokey voice of dear Fiona? This record got me through a lot. I was first inspired as a lovesick, emo teen, but revisiting this record when I began playing shows and writing my own material pushed me to create and write anything that’s nearly half as good as the songs that are on Tidal. She made such a huge impact on me.

I listened to this album for an entire year in my car when it came out. Nothing else. I saw Adele’s video for, “Chasing Pavements” on MTV at 4 AM, and sat up in bed. Her voice! Her look! Where did she come from?! I looked her up and immediately was hooked on her songs, her soulfulness and her body positivity. When Adele first came on the scene I had just started performing my original material out and I was a nervous wreck. I was at my heaviest weight and I wanted to share my voice and my songs with the world, but I was sure that I would be judged and made fun of. Well, here came this curvy redhead with a booming voice and no fucks to give who was around my age and it made me feel like I could live my dream too.

There’s a jazzy quality to this collection that is absent from her more recent work, which has been praised as her best. I like the stripped down version of Adele. Less diva and more old soul.

Irish soul at its finest! Van the man has a special place in my wee heart. This album is great craic, as the Irish would say! I love the instrumentation on songs like, “Caravan”-those horns! This is an album I put on when I need to belt it out and dance the worries away. And who can deny the beauty of the lyrics flowing along the Irish shoreline in “Into the Mystic?” I truly think it is one of the most lovely songs ever written.

Favorite track, “These Dreams of You”

If I had to pick my all time favorite songwriter, David Gray would be it. Hands down. His writing is honest and full of stunning imagery. His songs are film reels. Poetic snapshots of love and precious moments shared. I had the privilege of seeing him live a few years ago, just him, a guitar and a piano. He performed a lot of the songs on this record. I was brought to tears by the emotion in his voice and the passion in his playing.

I turn to this album when I have writer’s block. When I need a jolt. When I feel overwhelmed by some stressful thing or another. If you’re a songwriter and you’re unfamiliar with his work, start by buying this one. Be prepared to feel slightly inadequate by comparison, but also extremely inspired. And be ready to feel all the feelings. All. Of. Them.

I Never Loved a Man the Way I Love You, Aretha Franklin

The Queen of soul, Aretha has been my favorite singer since the first time I remember listening to “Respect” with my parents as a pudgy toddler, bopping along on my pull-up. Her voice completely mesmerized me, and continues to do so. There are many classics on this album, (“Respect”, “Dr. Feelgood”, “Do Right Woman, Do Right Man”), but, my favorite track is her cover of Sam Cooke’s, “A Change Gonna Come”. Rest in power, Queen!

Anyone that knows me knows of my infinite love for Led Zeppelin. Zeppelin has always been my number one musical crush. And, while they were never the critics favorite group, they still managed to become one of the biggest bands that has ever existed, thanks to their heavy, solid rhythm section, (musical genius John Paul Jones and the incomparable John Bonham ), the intoxicating guitar mastery of Jimmy page and the soaring, unbridled, otherworldly vocals of Robert Plant. I was hooked the first time I heard the mood thump of the bass line of, “Dazed and Confused”.

The reason that this record is my favorite when compared to their other work is because of the bluesy feel. When Zeppelin started out the described themselves as a, “blues update” band. You can hear the influence of American backwoods blues on this record, especially on the down and dirty groove of “I can’t quit you baby” & the harmonica blaring on, “You Shook Me”. It is sexy and rebellious and full of feeling. My kind of record.

Rubber Soul is a hazy dreamscape buzzing & humming with the funkiness of 1965. I love the Beatles. This album solidified them as one of my favorite bands. The tight, crisp layered harmonies kill me. The call of the sitar on, “Norweigan Wood” was one of the first sounds that made me fall in love with music and want to create my own. I recently watched my best friend dance with her Dad at her wedding to “In My Life” and there wasn’t dry eye in the house. The sentiments and powerful emotions that the fab four were able to encapsulate in song are unlike any other band that came before them or any artists who has come along after they disbanded. I could listen to this record over and over.

Back to Black, Amy Winehouse

Amy came barreling into our hearts and blasting through our radios in 2006 with the smash hit, “Rehab”. The first time I heard that song while driving around with my friends, I demanded that they turn it up. I thought to myself, “Oh my god! Who is this?! This sounds like a Motown song!” And then I bought this record and I played it so much that I wore out my CD.

Amy had a distinct voice that sounded like it was from a different time. She was ferocious in her delivery. She held nothing back, in her singing and writing. I read an interview with her in some American magazine and when she was asked about her song writing she said something along the lines of,  “I say things to myself in songs that I could never say to myself while looking in the mirror.” I connect with that so much. She was a brilliant, courageous artist, as proved on songs like, “Back to Black”. I love everything about this record; the retro backing vocals, the soul chords, how bright and beaming her raspy voice resonates with each leaden word.

I can only imagine what kind of amazing music Amy would be gracing us with now, if her life hadn’t been cut so damn short.

Dashboard Confessional, A Mark, A Mission, A Brand, A Scar