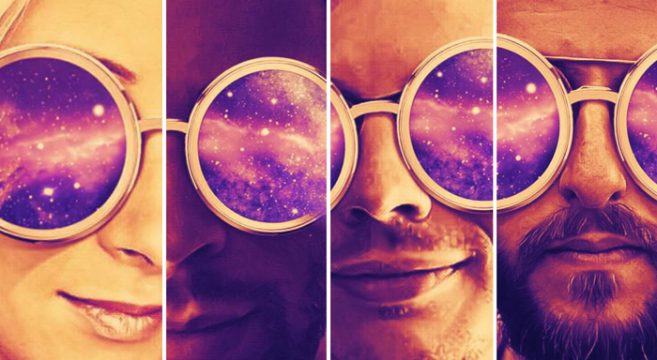 Asbury Park band The Extensions are a bit of a New Jersey supergroup. The four members are veterans of the local music scene who have performed in the likes of The Paper Jets, Fun While You Wait, Dave Mooney and Viewers Like You, and Centennials. Now the quartet are taking their experience and talent, honed after years of recording and touring, to come together to make something special. Judging by the rough first takes I have heard, Brian Erickson, Kevin Newcomb, Lisa LoVell and Pete Stern are creating the highest caliber indie rock.

They recently caught the ear of Mint 400 Records owner Neil Sabatino who must have been impressed as the band have just been signed to the label. Mint 400 Records has been expanding and signing many bands of late–Thoughts, Kerchief, and Home Is West to name a few.

I asked Sabatino what it was about The Extensions that drew them to him. “I love everything about Brian Erickson and the enthusiasm that he adds to any band or thing that he does. To me The Extensions reminded me of a modern version of The Smoking Popes but more complex musically. As far as adding them to the label on top of being something I enjoy musically the band has a good work ethic and gets what a music scene is all about. Brian has always been amazing about inviting bands to play in Asbury on his “One More” show or at Asbury Hotel or over in New Hope at John & Peter’s. We want bands to be part of the label that are interested in sharing resources and becoming a part of the Mint 400 family that not only takes from the label but contribute for the greater good of the entire roster.”

The feeling is quite mutual. “We’re really excited to be a part of Mint 400 Records. I’ve been a fan of their work for years. I knew Fairmont before I ever actually met Neil. It’s a welcome change and a new challenge. And knowing that there are people behind your creativity is really flattering and humbling,” explained guitarist/vocalist Brian Erickson. “I saw bands like aBIRD or Yawn Mower or Ruby Bones starting to climb aboard that roster and it suddenly felt like we might actually have a shot! We’ve all been playing music for a while now; all in different bands. This feels like both the next logical move and a big step forward.”

I’ve known Erickson for many years and whether as a musician with his band The Paper Jets, or a podcaster on The Great Albums Podcast or a contributor right here at You Don’t Know Jersey he gives 100% to whatever endeavor he throws himself into. The Extensions have already been creating chemistry while playing live for a while and I cannot wait to hear the debut EP.

I will let Sabatino have the last word. “We are thrilled to be able to help someone like Brian & The Extensions as much as he has helped our roster. First and foremost though, his band is excellent and that would have been enough for us to want to work with him but it does help that I feel like we are like minded individuals.”

You can catch The Extensions live at Wonder Bar in Asbury Park on April 15th, at Stosh’s in Fair Lawn on April 26th and at The Union Firehouse in Mount Holly on April 27th.