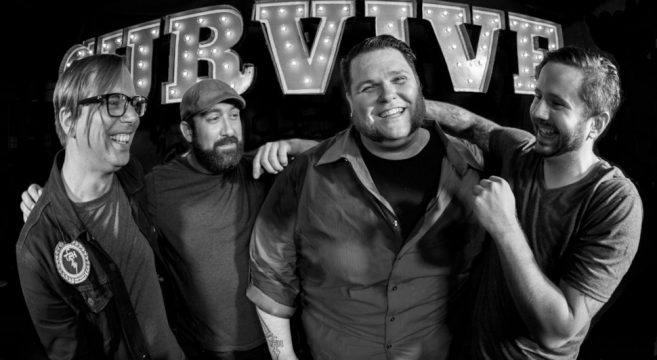 Way back in 2015 NJ.com came out with an article “35 Bands You Need to Hear in 2015.” Though that list contained many great bands, most were already well established in the local scenes. In response YDKJ tasked Conor Meara and Ricky Lorenzo of Roy Orbitron to counter that list with some awesome bands that might not yet be on the radar back then. Hence we came up with “35 Bands We’re Excited About in 2015.” Trenton band The Cryptkeeper Five made the list easily and have been steadily impressing since.

Bruce Sprinsteen’s insanely popular Born In The U.S.A. just celebrated its 35th anniversary last week so what better time to highlight TCK5’s recent cover of The Boss’ “No Surrender” from the 1984 album.

I asked singer/guitarist Johnny Ott why Springsteen is such a New Jersey icon and he answered with a written quote Joe Strummer of The Clash faxed to British music magazine Mojo. Quite appropriate give Springsteen was a huge Clash fan.

“Bruce is great.  If you don’t agree with that you’re a pretentious Martian from Venus. Bruce looks great. Like he’s about to crawl underneath the chords with a spanner & sock the starter motor one time so that an engine starts up humming & ready to take us on a golden ride way out somewhere in the yonder.  Bruce is great because he’ll never lay down & be conquered by his problems. He’s always ready to bust out the shack and hit the track. His music is great on a dark & rainy morning in England. Just when you need some spirit & some proof that the big wide world exists, the D.J. puts on “Racing in the Streets” & life seems worth living again. Life seems to be in Cinemascope again. Bruce is not on an ego trip… Bruce is actually into the music.  We need people like this. A lot of records today are made by people just to feed their fame. Bruce is great. There ain’t no whinging, whining, or complaining.. There’s only great music, lyrics & an ocean of talent. Me? I love Springsteen!!!”

Why “No Surrender” you ask? “We were, unfortunately, going through some sorta band breakup while we were in the studio. We’d lost our guitarist and bassist, just a short time before we started that recording session.” Ott continues “We try to record a cover or two when we’re recording…. something we take from The Ramones. “No Surrender” made sense, lyrically.”

So give a listen below and enjoy while you sit around recalling the glory days or drive through the swamps of Jersey.

You can also check the song out as well as other Cryptkeeper Five tunes over at Spotify.