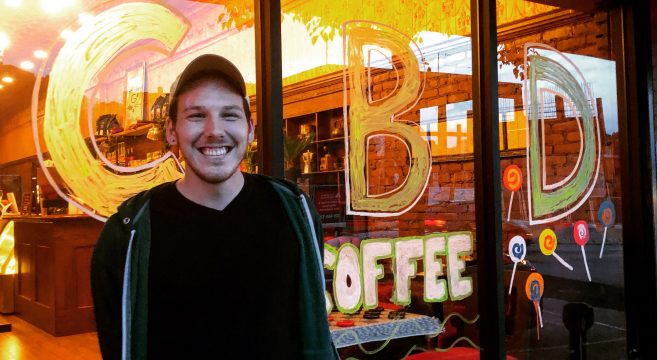 You may know Matthew Smith from Hodera—one of New Jersey’s most talented and exciting bands to come out over the past several years. While that band hasn’t gone away, Matthew has a new solo project, Bravely, which recently released its debut EP, Seeking. The solo music is more intimate and introspective, though no less passionate than his previous work. He’s taken the heart-felt lyrics of Hodera and placed them firmly in a more Americana/folky setting.

We sat down with him in the new location of Cafe Eclectic in Montclair to talk about it over some great coffee and sandwiches. Cafe Eclectic was a mainstay on Bloomfield Avenue for many years before closing to the great dismay of their customers—including ourselves and Matthew. They opened a new location across the street recently so we were excited to meet up there.

The EP is named to invoke the phrase “bravely seeking.” Future EPs will have a similar relationship with the project’s name. Matthew told us that some of the songs on Seeking are brand new and some are older songs that never made it into a Hodera release.

Pedal steel guitar plays a big part on the EP. The title track, ‘Seeking,’ and others have the instrument straining it’s haunting glissandi around Matthew’s soulful words. ‘Florence’ is especially beautiful with Matthew and Lacey Ellis singing harmonies and the pedal steel weaving its magic quietly beside them. Lacey is also featured on ‘I Want to Go Home.’

‘Where We Began’ might be the best song on the record. It’s got the classic Springsteen mix of national events and deeply personal stories. The song is autobiographical and it feels like you can almost understand Matthew’s entire life by the end of the song. Songs like ‘The Comedown’ return to a more Hodera feel with familiar tempo changes and big sweeping moods.

Hodera’s guitarist Doug Gallo plays guitar on the EP, which he also produced. Doug has really been making a name for himself as a producer over the last few years and the EP sounds fantastic. Matthew’s dad, J.O. Smith, also sings harmonies on the EP.

Seeking finds Smith looking inward and trying to find a way to make sense of things in these turbulent times. The seeking never ends but finding the strength to keep at it is sometimes the victory. Bravely is a perfect listen for anyone that is searching for something.

You can catch Matthew and Bravely’s EP release show at BoonTunes in Boonton on Friday June 28th. Link here.

Listen to Seeking on Spotify and Bandcamp now.