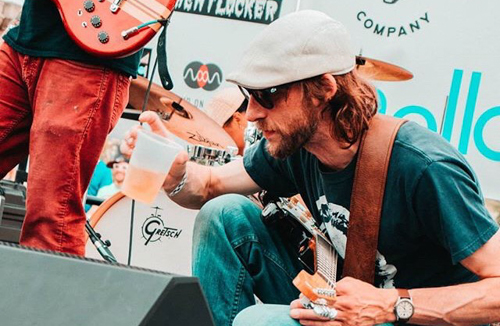 I have always been fascinated by what musicians listen to when they aren’t creating their own music. What music inspires them, what albums do they return to again and again—their “desert island” discs. With this in mind I decided to ask some of my favorite New Jersey musicians to name their top 10 favorite albums of all time. Not the albums that they think are important or that have influenced many other artists or ones of technical merit. I wanted to know their very favorite albums that they love just because the records mean the most to them.

When Montclair is mentioned there is one band that always springs immediately to my mind: The Porchistas. I can think of no other band that brings equal amounts of social discourse, tongue-in-cheek lyricism and incredible amounts of fun with every release and show. Having seen the band many times I can personally assure you that you’ll be smiling not long into a Porchistas’ gig and dancing along to songs like “Zombie Jesus,” “Radio Balls,” and “The Abe Vigoda Polka.” Admit it, you’re smiling just reading those titles.

If the above sounds kitchy to you, do not be mistaken. This is band with musical chops that are quite impressive. Don’t try to pigeonhole them into one genre. Not gonna happen. A big part of their unique sound is guitarist, producer, co-songwriter and lead vocalist Adam Falzer. Whether singing lead or playing a killer solo he is always bringing a serious intensity to a set that is always pretty energetic to begin with. He didn’t get the nickname “Devil Hands” for nothing. He is the linchpin holding the eclectic brilliance of the band together.

You can catch The Porchistas when they play Montclair Bread Company‘s Friday Night Music Series on June 28th. You can come out for some pizza and doughnuts and hear why the band is such an institution in these parts. A full Summer schedule of the series can be found here.

This list is in chronological order from when I experienced them.

When I bought this album, I was still listening to mostly hair metal but getting stupid bored of it, or stupid from it. I saw the album cover when I was looking though a friend of the family’s tape collection and was intrigued. I didn’t listen to it then, but since he said it was good, I bought it a year later after seeing the “Fight the Power” video on MTV. The whole package from Public Enemy was intense; the lyrics, the imagery, the beat. I loved how shocking it was to white suburbia. I had started learning guitar a couple years earlier and I can definitely say that PE brought me to the next level by teaching me what music can be.

After abandoning the hair bands, I was a little lost. I was listening to some Zep and Fab Four (not quite ready for Jimi) and decided to go even further back. I started playing the blues, so I felt I needed to listen to Jazz. It’s a little cliché, this one, but it’s also the record that most people find palatable enough to begin their Jazz journey. And it’s a perfect, beautiful fucking record.

Listening to more Jazz and bands like Zepplin allowed me to fully recognize Jimi as the best. Hendrix consumed me and I found everything I could at record stores; I still have War Heroes and Dorella Du Fontaine on CD. I had Cry of Love too but it was lost in a car crash (that I wasn’t in). Four or five years ago, I picked it up on vinyl at Amoeba and fell in love again. I think Axis: Bold as Love was probably more influential on me but this record has his best writing and features his best rhythm section, Mitchell and Cox.

Pink Floyd – Dark Side of the Moon

The gold standard of psychedelic records and still my favorite late night, long drive album. Up until this point, I had never done drugs. I think this record itself altered my mind; it never loses its potency.

I always liked the early Beatles stuff, especially when I was little, but after my affair with Floyd and Jimi, the later stuff just kills it. Psychedelic Pop…damn where was I? This existed for almost 30 years? It’s hard to pick a favorite Beatles album, but I always come back here.

I was introduced to Harry and Randy by the person who I would soon come to respect as the most talented songwriter I’ve ever known personally. It’s hard to pick just one of their records as an inspiration to me, so I’ll lump them together using their collaboration. Harry has such an angelic voice and wide register and Randy brings the pretty melodies (and cynicism) to really create something special. It’s just piano and vocals from two of the best. If you haven’t heard it, you should.

Introduced to me by the same person that got me hooked on Harry and Randy, Blue had me experience a different kind of structure to songs that seemed to wander in and out of their sections or caught you by surprise, but they still retained the hooks and refrains of pop. Same goes as what I said about Kind of Blue, there’s a reason these albums are considered cliché on lists…

By 1995, I already owned the other four “classic period” Stevie Wonder records and knew what I was getting when I finally bought it; easily the best R&B record and arguably the best popular record ever made.

The Bends was a great record but this one, it’s an adventure. Like Dark Side or Sgt Pepper’s, it’s an all or nothing record; it successfully has you strapped in for the long haul from the first few notes of “Airbag”. The songs are so strong, the arrangements are perfect, and the production is top notch. It’s one of the last great concept records and just like Dark Side a good choice for a long, lonely and late drive home.

Released just a week after OK Computer, came Ween’s concept. I had heard and liked Ween’s music before but after this one, I was a fan. They are probably my favorite band and Dean is definitely one of my favorite guitarists, because of The Mollusk. Ween inspired me to do a little genre-hopping myself and to be a little more silly in my own writing.