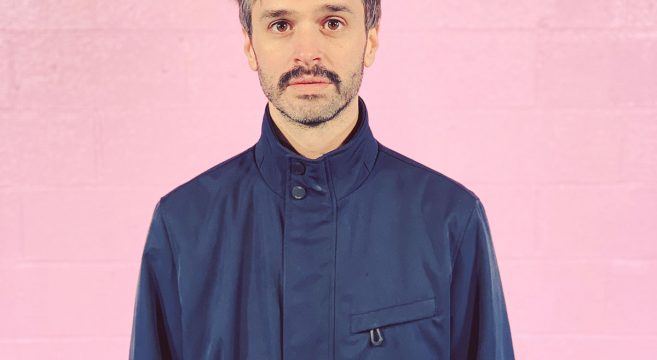 Val Emmich is a singer/songwriter, actor and author who spent much of the past year dealing with anxiety and depression. He released Tizzy, earlier this year, which chronicles those experiences and how he has been dealing with and processing it during this time.

It is also one of the best albums of the year. We caught up with Emmich in Jersey City where he currently resides with his wife, daughters and a new puppy. He suggested we check out Low Fidelity and their “Detroit Style” pizza. As we had never heard of this style, we were quite excited.

The pizzas were on the small side which only helped us order more varieties and they were all rectangular. The Motor City was the first one we ordered since it seemed appropriately named. It came with two kinds of pepperoni (smoked and cured), mozzarella, oregano and marinara. The crust on all the pies was very light and airy while also being thick enough to hold up all those toppings. The best parts were the cheese that melted down the edges and got really crispy in the pan while baking. It gave you a little something crusty to hold onto and a little kick of browned crispy cheese at the end of each square.

Our favorite pie, by far, was the Earth First one. Crimini and Shitake mushrooms were nestled in ricotta cheese, bourbon caramelized onions and truffle oil. It was an umami bomb that didn’t overpower the delicate crust and ricotta. Heavenly pizza, for sure.

While we ate, we chatted with Val about life, music, arts generally, politics, families, and much much more. It was a pleasure hanging out with him.

Emmich grew up in Manalapan in a family of four kids and though one sister sang in church there wasn’t much music in the household. There was a piano in the house but it didn’t get played often. The only musical talent in the family that he was aware of was his grandfather who was a concert pianist in Russia. His grandfather studied at the Moscow Conservatory where Tchaikovsky taught. He came to the US as a refuge after World War II hoping to have a career in music but it did not work out because classical music popularity was on the decline at the time. “I like to think that some musical thing came from him.”

As a kid, his mom bought him an acoustic guitar which he picked at a little. He also tried saxophone for the school band and he toyed with the house piano, but nothing really stuck. It took a long haired family friend at a Thanksgiving gathering playing a one-string Metallica riff to make him want to pick up the guitar. “Once he taught me you can work with one string, I wasn’t as intimidated and I started to write one string songs.” Emmich continued, “I oddly wondered what happened to him. He set me on this course to become an artist professionally since graduating college. It wouldn’t have happened without him.”

What followed has been an impressive output of more than a dozen albums. The Star-Ledger called Emmich “one of the finest songwriters in the Garden State, [and] also one of the most prolific.”

He accomplished this while also working as an actor with parts on such television shows as 30 Rock, Vinyl, The Big C and Ugly Betty. We asked how he got started acting and he told this story: One summer he was working in a bookstore between semesters at Rutgers “The boss looked at me one day and asked “Have you ever thought about acting?” and I was like, no.” Turns out her son had just got a bit part in The Sopranos and though Emmich had something that made her think he was a natural. Emmich met the son’s agent and next thing he knew he was shooting a Sony commercial in Canada. “My acting friends hate this story.”

And then there is his writing. His debut novel The Reminders was a Barnes & Noble Discover New Writers selection and his latest Dean Evan Hansen: The Novel, an adaptation of the popular Broadway musical, is a New York Times bestseller. On writing Emmich confessed “Of all the things I’ve done, writing books is by far the hardest. But that is what attracted me to it.”

We asked him about living in New Jersey and he said, “there were times where my acting career was getting to a place where I should have moved to LA or all my friends were moving to Brooklyn and for some reason I dug my heels into Jersey” says Emmich. “I was like ‘Guys, I don’t believe that you think those places are better.'” He appreciates all the things about New Jersey that makes it special and that endeared him to us. All three of us at dinner were on the same page about that specialness that’s in our Garden State.

His latest musical album, Tizzy, is a work of both beauty and honesty; from the strings of an acoustic guitar that open “Dark As Nighttime,” to the nervous energy of “Worry” which reminds us that we all sometimes forget what’s important, to “24 Hour Blues Cycle” that takes a look at all that is horrible in the current news cycles.

“I just wasn’t handling things right. My wife told me I had to get my shit together. For my kids I needed to be less anxious and dark all the time.” Emmich adds, “My daughter asked me once “Why don’t you smile more?”” He sings with his daughter on the beautiful “Every Time I Leave My Girl” and the love comes across. He said that as soon as he had acquired an old piano, all these songs started coming out. Music as therapy in its purest form.

“My career is still expressing myself and I feel so lucky about that.” He is currently working on a new book that is close to done and also wants to record a new album. “As the last album was mellow and moody, I recently wrote a bunch of upbeat and aggressive songs.” The anxiety is still there. He wonders, “will my book be accepted or will it be a failure, will I have to get real job.” I don’t think he has to worry. He is moving in the right direction. “I found this way I can create art and be a dad and it’s good so far.”