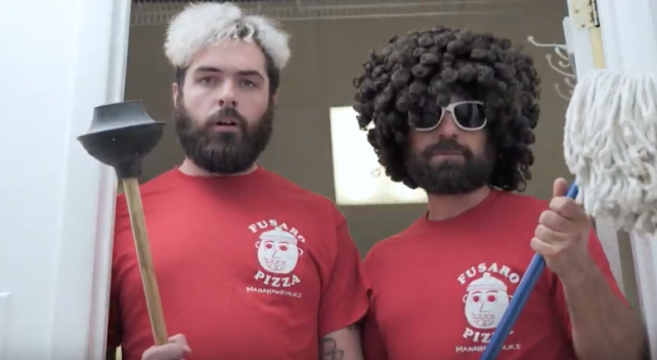 Asbury Park band Yawn Mower premiered their new video for “Jersey Shore” over at our friend Cool Dad Music last week and it is so ‘Jersey’ we felt we had to share. We have been trying to schedule a Pizza With the Band with them for a while and the timing has not worked out yet (oh but it will someday, my friends). The video, created by Rosi’s Art Productions (Rose Lamela, Christo Apostolou, and Allison Councill) has pizza and a band so is pretty close to a PWTB. It is also a lot of fun.

The song is a cover of a 1999 song from Milwaukee band The Promise Ring on Yawn Mower’s latest EP Why Work Harder Than You Have To released on Mint 400 Records. Mike Chick and Biff Swenson took on a handful of 90s songs on that EP and in the video for “Jersey Shore” they take on jobs at Fusaro Pizza in Manahawkin. We recently went here on a recommendation from Biff and have to say the pizza was awesome.

The video opens with the guys showing up for their jobs at the pizza joint and are greeted with a plunger and a mop and an unenvious task in the restroom. Once done it is on to kitchen duty and they do the chores with the air of wanting to be somewhere else. Like out back by the dumpster playing music. Oh and Biff uses a pizza box as a cymbal.