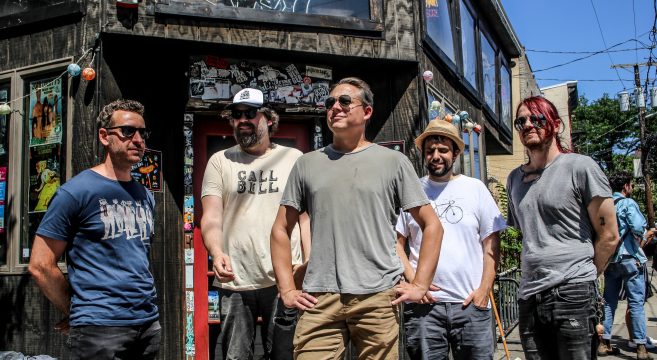 When Bloomfield band Pioneer the Eel released their outstanding self-titled debut album in 2016 it was like a breath of fresh air. The minimalist, innovative record did not sound like anything else on the New Jersey indie scene. No bass, no synth, no cymbals. It made PTE one of the most original, inventive bands coming out of New Jersey.

So, what did one of the most interesting bands do for their next album? Change it up! We are thrilled to premiere the new sound landscape of single “Pereo.”

Note that the single’s cover art is all red. The entire up-coming album will have a red theme where their first release had a neutral black and grey theme. The red fits perfectly with their new more vibrant soundscape. Wayne is their resident graphic designer and his interesting touch is seen all over their artwork. He told me that he revels in creating this artwork since at work he’s always designing for customers with their own vision.

Though pleased with the way the debut album came out, guitarist/vocalist Victor Fernandes, guitarist Craig Monoco and drummer Wayne Green wanted to take their sound in a new direction and expand their range. Enter new members Adam Bird and Tom Barrett. Bird, formally of Those Mockingbirds and currently aBird, came on board to play synths and Tom Barrett, formerly of Overlake, joined on bass.

What Pioneer the Eel has done is kept their innovative sound while expanding what they can do with it.

The new instrumentation is introduced straight away in “Pereo” with the hypnotic synth that starts the song off before being joined by the guitar and drumming that made the band so unique. A tribal start that slowly builds and adds instrumentation as we go along. Craftsmanship is always evident in PTE’s music and never so well executed as here. The interplay of Fernandes’ and Monaco’s respective guitars is especially gorgeous here reminding me of The Cure’s late 80s output.

Most bands would not release an over six minute single as the first for a new record. But Pioneer the Eel is not most bands. The single brings the essence of earlier PTE and adds the new fuller, broader sound. Delve deep into this single and let Pioneer the Eel steal your heart.

The single drops on July 19th from Mint 400 Records who will also be releasing their new album later this year.

You can catch Pioneer the Eel at Stosh’s in Fair Lawn on July 19th.