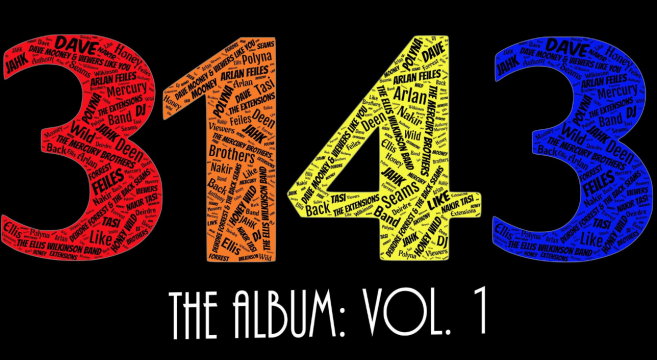 Asbury Park based 3143 Artist Management have only been around about a year but have already made dramatic inroads into the popular local music scene. By signing some of the most talented musical acts in the area they have announced themselves as a major player in bringing exposure to not only their own artists but the Asbury Park music scene as a whole.

The man with the vision is writer, director, producer and comedian KL Martin. Why would someone who already has so many creative endeavors on his plate take on the role of artist management? “Music, which I swore up and down on a stack of Torah that I would never get back into and challenges, making something that might seem impossible or at least difficult, easier and possible,” Martin explains. When one is as passionate as he is one finds the time. He continues, “The talent within scene made it impossible to not see the potential of these bands I watched consistently but also to be at the forefront of what I know it is going to be full developed.”

It seems he is certainly impressing folks enough to come on board. Brian Erickson, formally of The Paper Jets now fronting new band The Extensions, signed with 3143 because of what he saw in Martin. “In just over a year KL has made such an impact on the music scene not just as one of its most active and visible participants but as one of its foremost cheerleaders.” He acknowledges what Martin has done for him so far as well as for artists like Dave Mooney, Deirdre Forrest and Ellis Wilkinson. “The Mercury Brothers, already one of Asbury’s most popular bands, just signed their first record contract and seem poised to break out of the scene entirely” Erickson adds.

The roster currently includes many Asbury Park area favorites; The Mercury Brothers, The Extensions, Dave Mooney and Viewers Like You, Deirdre Forrest and the Back Seams, Arlan Feiles and the Brokenhearted, Nakir Tasi, Honey Wild, Polyna, Biplane, JAHK and Deen Anthony. They have also recently signs bands from outside the area such as This Bliss and The Furies.

What kind of impact is agency making? “I am extremely grateful for everyone at 3143 for their hard work, dedication and commitment to further the careers of indie musicians in Asbury and beyond,” says Deirdre Forrest. “I feel like I truly have goals to work towards. I have reached a place where I have a very clear path laid out ahead of me and I know that I am not alone.”

Friday September 20th is a huge day for 3143. They will release an artist compilation featuring many of the artists on the roster so you can get a taste of the talent and diversity 3134 has to offer. The same night they have the comp release party at Asbury Lanes, a show that also serves as the release party for Bellicose, the new album from The Extensions. The show will be a wonderful way to get acquainted to some of the best local music going on in Asbury Park right now.

The work Martin and 3143 is doing is a lot of stuff that is out of the spotlight and behind the scenes. The artists who are fortunate to sign on will have their biggest fan behind them. Erickson and The Extensions know how vital having that kind of fan can be. “He helped put together our release show at Asbury Lanes and helped facilitate a good bit of press and PR around the record. And for a brand new band like us that level of organization is invaluable.”

I asked Martin about creating 3143, what he can offer musicians and what makes Asbury Park special.

What made you decide to start an artist management company?

I initial wanted nothing to do with music again, being 100 percent honest. I worked smaller indie label in my early 20’s, all of which were bought by larger major labels. Seeing that and the change in culture left a pretty sour taste in my mouth. However, after retirement from basketball and filmmaking brought me back north, specifically near Asbury Park, the scene made it it hard to pass up to step back into music.

For a younger band what do you offer that a record label might not?

We offer guidance and experience in the industry that many bands do have or are not prepared for. We are pretty hands on as well. We are involved in almost every aspect of their careers which is something that doesn’t happen at mid to major level labels. I really believe our job is to prepare them to be some version of self sufficient so when they do get that opportunity they make the most of it and the time they have. Also we are a extra set of hands to do some of the heavy lifting as well, both literally and figuratively.

What is the biggest challenge you’ve faced since starting the company?

To build trust and finding the right bands. It’s very easy to become a collector of bands and not seeing the big picture which is something I pride myself on. However, I was guilty of this for a bit and really brought on good bands, hell GREAT bands but they weren’t the RIGHT bands. So I took a step back, added some help and really came to a point where I wanted to build where Asbury was just the beginning and not the end all be all. That attitude sort of changed everything.

How do you determine which bands to represent?

I have to actually LOVE their music. What they have done and their work ethic is so key for me. You run into a lot of bands that are very good but just want to be all Asbury or a weekend thing. This is fine but then there is no real point why you’d need management. So their goals have to align with ours and the beliefs otherwise we are wasting each other’s time.

What makes the Asbury Park music scene so special?

Asbury is Austin light, meaning that its got the same type of talent and so many bands but due to the season it dies for 7 months out of the year. Outside of that caveat, you’d very hard pressed to find this many bands that are supremely talented crammed into one spot anywhere else in the country. It sort of extraordinary honestly.

Tell us a little about the show you’re putting together for September 20th.

So Asbury Lanes September 20th will be the compilation release featuring The Mercury Brothers, Dave Mooney, The Extensions, Arlan Feiles, JAHK and Deirdre Forrest and the Back Seams All which will be playing that night as an UNOFFICIAL kick off to a great weekend of music since SEA HEAR NOW starts the following day. Also featured on the album is Hip Hop Nakir Tasi, Honey Wild, BIPLANE (Formerly The Ellis Wilkinson Band) and Polyna.

We have started expanding into bigger cities already with a few surprise announcements coming leading up to the show itself. Continued expansion in both of geographically beyond asbury and staff is a top priority.