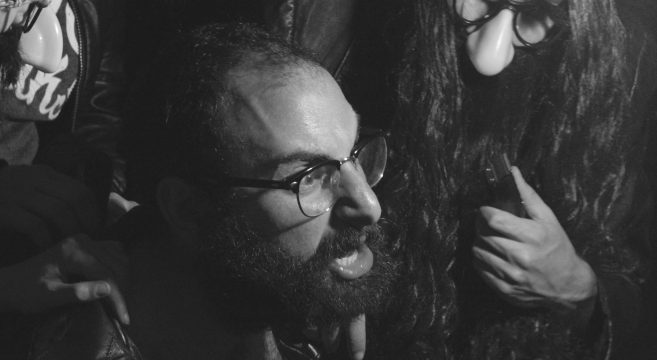 YDKJ Video Premiere: “The Monkey” from The Foes of Fern

We are thrilled, no honored actually, to premiere the new video “The Monkey” from Asbury Park band The Foes of Fern. The band is the brainchild of Matt “Fern” Fernicola who you may have encountered around the local scene as he is well known, not just for producing some amazing music, but for his gloriously luxurious beard. Until now.

As part of an Indiegogo campaign to raise funds to complete their first album “Girl In All My Songs (Ghosts)” for Telegraph Hill Records a certain intriguing perk was offered. If $5K was achieved Fernicola would shave his ever-present beard. GASP! The goal was met and being a smart entrepreneur he decided why not turn that into a video. And what a video it is.

Opening in a dimly lit room Fernicola, in trademark wool cap and wig with full beard, is tied to a chair in what appears to be a set-up for a Saw or Hostel sequel. If only it were that benign. He is then surrounded by folks who look exactly like him brandishing a knife and electric razor. Soon enough our now-shaven hero is subjected to clones of his previous self performing in front of him as he sits helpless.

“Everybody likes it when you’re one of them,” Fernicola sings getting straight to the serious matter at hand. Over an upbeat indie melody what is being examined is how one can paint themselves into a corner, in this case with an image, and how it becomes so expected that you end up feeling like a performing monkey. “You’ll never get the real me” he continues but is that what the people really want? Often they just want the artifice blissfully ignorant of real connection. The only way to break out of that grind is reinvention. You just gotta shed that skin. Or beard.

The video is directed by Dan Natale and Linda Pluhar of Mango Visuals and stars a bevy of the band’s friends though you might not recognize them under the fake beards and wigs. The Mercury Brothers, Connor Bracken, Levy Okun, Jessie McCormick, Victoria Laurence and other look like they are having a wonderful time here as “Ferns.” The video is incredibly well done and as it ends over a wonderfully raucous wave of guitars, horns and woo-hoos you too might be thinking of changing things up for the better. That’s a good thing.

I asked Fernicola a few questions about the video.

So what was the sensation when the air hit your newly shaved face?

It felt so weird! Good, but weird, ha. I spent 5 years with that beard. Turned it into my logo, made it the thing that everyone associated me with. It was a big part of me but I kinda felt stuck with it. I wanted this video to be like the “death” of Fern. I had been playing so many shows with that big beard and wig of mine and I felt like I was kinda stuck to be performing with it forever. So in this video I’m breaking down the image that I built for my stage persona and I can kinda start anew. I do occasionally bring the wig out still; it’s made it’s way into a couple other videos I’m filming. I just like not having to play every gig with it. That thing got very sweaty, lol.

What was it like for the other musicians to adopt the classic Fern look?

Having all my friends dressed in fake beards and wigs was hilarious. My directors got those fake glasses and noses and it just put the whole look over the edge for me. I was dying with laughter throughout the entirety of this shoot.

How long did it take to film the video?

The video was filmed in two back-to-back days! Prob like 15 hours of filming in total. We filmed in June 2018, so it’s crazy that we are releasing it a year and a half later. Almost feel like the shock value of me shaving my beard is kinda gone now. But it was worth the wait! The Foes are starting to play more shows again so I’m happy to be releasing my new material now that the band is relevant again.

If you had to pick, who won this battle of the Ferns?

I hope at the end of the day “Matt” won the battle of the Ferns, haha. I was getting too in my head about how I needed to look and act when I was out in public that it almost felt like their were two of me. I still love performing, and gigging as much as possible, but I was getting a little tired of the character that I created.

How long did it take for the beard to grow back?

The beard grows quick, lolol. I’ve been trimming it a bunch so it never had the chance to grow back to its old length. But I think I could get it there in like 4 months…