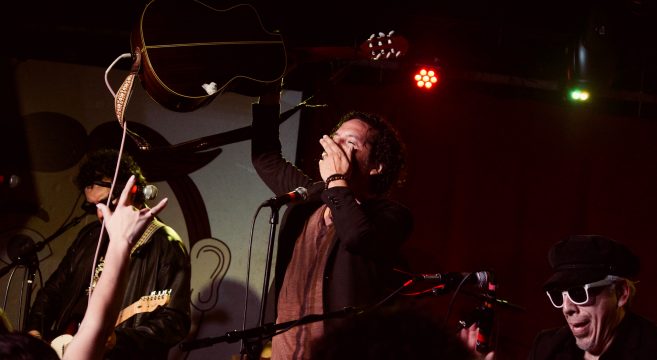 Asbury Park is home to quite a bit of diverse musical groups and some of whom have gone on to achieve significant success and recognition as well. One such act latin-rock unit deSOL formed in 2001 and originating from Asbury Park was a highly notable act that not only established a reputation locally but also went on to tour globally, were included at such renowned festivals as Bonaroo and ACL and even performed for active duty members as well. These accomplishments while all significant did not prepare me for the excitement, emotion and sheer exuberance of deSoL’s reunion show held at The Wonder Bar this past Friday. As a group, deSoL showed no signs of any diminished rapport or connection as they delivered not one but two sets of exhilarating, high-energy and passionate sets of latin-style rock that succeed highly in keeping audiences on their feet quite literally all night long. As a live experience, deSoL showcased their lively stage presence, musicality, dynamic range and genuine sense of connection with their audience for the entire duration of their sets.

While deSoL has seen various different line-ups over the years, the core members were in attendance that night and all were in top form. Frontman Albie Monterossa known also for his efforts around town as head of operations at Lakehouse Music Academy displayed plenty of charisma, enthusiasm and vitality on stage and each band’s member’s chemistry with one another was tight-knit. The style and presentation of deSoL’s performance offered a steady mix of Santana-esque rock numbers alongside more international-flavored ones, thus keeping the setlist spontaneous and varied. Each member on-stage was allowed a moment to shine and brought their own unique sense of musicality on stage with them. Credit goes to James Guerrero on drums, Chris Guice on bass, Andy Lekte on organ, and Chris Stone on drums as they all respectively contributed their own dynamic flair to their respective individual performances.

While a good band should most certainly have a strong sense of musicality, it’s even more important that they establish an equally strong connection with their audience. Thankfully for deSoL, they were more than up to the task. deSoL interacted with the audience all throughout the night and made them all active participants as well. The band engaged the audience in call and response, got them salsa dancing more than a few times and even got them all jumping well past 11 pm. It’s safe to say deSoL were having a party on stage and each member of the audience had an open invitation.

While there’s no shortage of diversity within the music scene, especially that of Asbury, deSoL’s reunion show was a welcome change of pace. Their mixture of latin and rock music was accessible, modern yet well-rounded and an absolute blast to watch. Reunion shows can admittedly be a tricky prospect and their success or lack of can come down to a variety of factors. However, when it came to their reunion show deSoL proved there they still have plenty of rhythm, heart and energy left to spare and the results were truly exhilarating to watch. All in all deSoL’s reunion show was a more than satisfying return for the band and proof that their passionate blend of genres is still as lively as ever. Now let’s hope it’s not too much longer before they do it all over again.