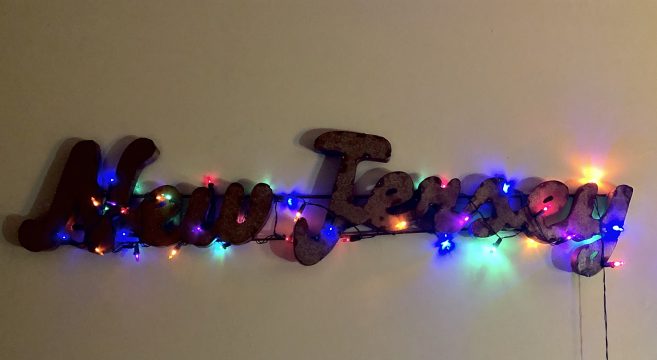 OK, I don’t know what to call these awards because I haven’t done them every year and they also aren’t all music-related so I’m tentatively just calling them The Jerseys. Sound good? Good. Here goes.

We keep hearing stories about how Matt Cohen, the lead guitarist of Ruby Bones, will wear anything the band chooses for him. In addition to adding a Rock God element to Ruby Bones, Matt has added a real flair to their stage presence. After seeing the Urban Cowboy look from a show at Montclair Brewery, we knew we had a Best Dressed contender. No one else could have possibly topped this particular look, so Matt takes the win.

Matthew writes songs that cut you right to the bone. His solo release, seeking, as Bravely this year brought a quieter set of songs for even deeper reflection on his beautiful words. Musically, they are gorgeous but it’s the lyrics that mean everything to us. His songs are real, vulnerable, and so close to touching raw-nerve emotion that each track breaks your heart just a little bit more. We are desperate to hear more. Soon.

John really “ripped” it up this year. He came in second to someone who was definitely a ringer in the Meadowlands Pork Roll Eating Contest… so, in our opinion, he actually won. John put out one of our favorite albums this year, Deep Fried. And, he got into an Instagram beef with Chris Gethard. He’s a genius. He’s a coffee god. He’s YDKJ Bad Boy of 2019.

Stephen Chrisomalis Jr., owner of Steve’s Burgers, opened up a second location this year and put his dad right to work in it. Steve Sr. is doing a bang up job at the new restaurant in downtown Garfield but Steve Jr. is still the Restaurateur near and dear to our hearts. Steve’s Burgers got their start in 2010 just when we did. Steve goes out of his way to help us celebrate milestones, lets us giveaway food, and even gave us our biggest honor to-date, the You Don’t Know Jersey Burger. We love you, Steve!

Jackie_1929 likes nearly all of our posts, and is even usually the first or second like. She’s contributed some posts on our feed. And, she’s a basketball phenom. She’s amazing and we can’t wait until she’s willing to be a full-time writer and contributor for us!

Michael quit his full-time job in 2018 to live his best life and we already admired him at that point, especially after he helped us create our favorite NJ music, the Stuff This in Yer Face series. This year, he made us really jealous because he and his wife, Dania Ramos, created a wildly successful podcast, Timestorm, where the Ventura twins travel through time to preserve their Puerto Rican culture’s true history.

Michael and Dania work as Cocotazo Media and they are amazing artists and creators. We can’t wait to see what happens in 2020 for them!

When does Neil sleep? His record label, Mint 400 Records, released over 60 records this year… most of them NJ artists. He produces a lot of those albums himself. He puts on multiple live shows per month. He also turned the North Jersey Indie Rock Music Festival into the Indie Binge this year which was a more intimate, and cooler, way of hearing six or seven hours of amazing local indie music. He has a full-time job and a family, on top of it all. His wife, Jamie, gets honorable mention as Most Understanding Wife for all the time he must be away from home.

As 2019 winner of the Best Gelato in North America at Gelato Festival America, Mike Guerriero of Gelati by Mike was the easy choice for Coolest Food Maker. His Blueberry Basil dairy-free winning gelato is amazing. And, we like a lot of his other flavors, too. He’s got a great sense for flavor combinations and he’s really nice to boot. I’m still committed to making #blueberrybae happen.

I got to make award winning #gelato over my lunch break. How’s your day going?? #Blueberry #basil gelato from @gelottimontclair won chef Mike Guerriero the Grand Prize at the @gelato_festival_america in Miami recently. Here he is doing his best #BlueberryBae. #vegan #montclair

We’ve never met, and we probably never will, but Kelly Campbell’s Wall, NJ basketball style on the court is thrilling to watch. Alice is a DePaul alumni and we’ve been going to Blue Demon basketball games at Seton Hall ever since DPU entered the Big East. Kelly brings a fantastic energy to the team and she also brings lots of family members to local games so we’re not the only fans at these games anymore. She’s always ripping rebounds out of opposing team’s hands or ending up laid out on the court after tearing it up under the rim. One year, she came to Seton Hall and played with a black eye. She’s such a bad ass! She’s a Senior so this felt like the year to call her out on the site. We can’t wait to see her and the team play SHU this February. We’ll also be going to the Big East Women’s BBall Tournament this year to watch the Kelly vie for repeat Big East Champs this March. Thanks, Kelly and the Campbell family for bringing some amazing games to NJ!