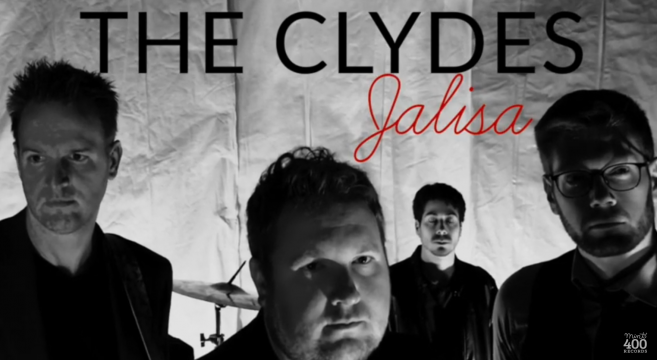 We are thrilled to premiere the new video “Jalisa” from New Brunswick band The Clydes. The song is off their excellent newly released album Old-Time Monarchy which finds the band revving up the use of synth into their already well established alt-rock sound.

That dark synth is felt immediately from the beginning of “Jalisa” and sets the tone for the video that is filled with ominous shadows, harsh lighting and somber faces. The direction adds an air of mystery that works with the song’s slightly gothic undertones. Needless to say I really dig it.

I asked guitarist/vocalist Brent Johnson about the tune. “As a song, ‘Jalisa’ was a big step for us. Brian — my brother and our guitarist — and I wrote it after a trip from Nashville. Brian was thinking of those clean guitar licks that come out of that country city.” He continued, “It was a little too slow and weary at first. So we programmed a synth and shook it up. Nashville turned into 1980s Manchester. And the video fits that feel.”

“Jalisa” was directed by Mint 400 Records owner Neil Sabatino who has directed three of the band’s previous videos. “We did it right in Nutley in an old warehouse using just the band and some green and white paper. In addition, the cutaway shots are from the movie “Carnival Of Souls” which is an old horror movie that became public domain.” Sabatino further explains “It fit our theme so we used a bunch of clips from it.”

The Johnson brothers along with bassist Andrew Cougar Orlando new drummer Pete Gambino have created an emotionally noirish video that is perfect over the great guitar interplay and that slinky synth undercurrent.

You can check the band out live on December 14th when they play Pop Break’s Locals Christmas Party & Toy Drive at Convention Hall in Asbury Park.