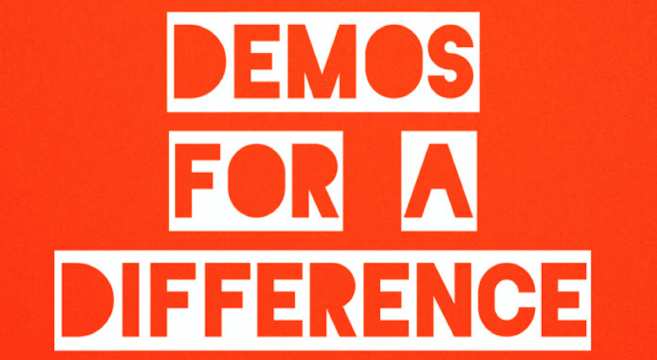 Demos for a Difference is a collaborative album by a wide variety of artists doing what they do best to raise money for a worthy cause: getting creative. Over 160 artists have lent their voices to the project with 100% of proceeds to be donated to the NAACP Legal Defense and Educational Fund.

The album, which will be released exclusively on Bandcamp on Friday July 3rd, includes musicians, rappers, poets, writers and comedians who have contributed demos, live versions and rough studio cuts. The goal of the project is to amplify the voices of black and brown artists, activists, and community leaders. Demos for a Difference also hopes to highlight the importance of merging art and activism, give artists another avenue of supporting Black Lives Matter, and create a stage on which voices from POC can take center stage.

I asked project organizer and Asbury Park musician Brian Erickson about the success of the number of artists who contributed. “At deadline-time, we received a little over 160 submissions, all of which are going on the album! But when the project was first launched, we were only expecting maybe 20 or 30.” Given the expected amount, Erickson is clearly thrilled. “It’s humbling when artists from around the world saw what we were doing here in New Jersey and started reaching out on their own. A lot of those people echoed a similar sentiment: ‘I didn’t know what to do by myself.'”

“I’m very honored to be a part of this project. So many great artists are involved, and the movement behind this project is something personal to me as a black man,” said Will Blakey, a musician who contributed to the compilation album as a member of the Bryan Hansen Band. “Too many people of color aren’t properly represented by the law. This partnership with the NAACP looks to make sure that things like that don’t continue to happen.”

“For me, the timing was uncanny,” said drummer/guitarist/vocalist Joshua Van Ness, who contributed the song “The Brightest Star” featuring Mike Sarge. “I wrote this song and the very next day I was approached about this project. Being a part of our community coming together for equality is really special.”

“This isn’t just an African-American problem, this is a human problem,” said KL Martin, CEO of artist management firm 3143 Management and a contributor to the compilation as a standup comedian. “To watch one group of individuals based on the color of their skin be mistreated for an extended period of time is outright wrong. And while I’m not saying that this project will suddenly make that go away or lessen the effects, it is a start in the right direction by bringing musicians, poets and everything in between together under what I consider ‘the great uniter’ — ART.”

If each artist can bring in a few people to contribute money, the project should be quite successful. What does Erickson hope folks do beyond contributing to Demos for a Difference? “I hope the project inspires people to continue finding creative ways to be helpful and, most importantly, to listen actively to black voices.”

Head over to Bandcamp on July 3rd to get some great music for an awesome cause. The platform has also announced it will waive all revenue share on that day for an added incentive to help the cause.