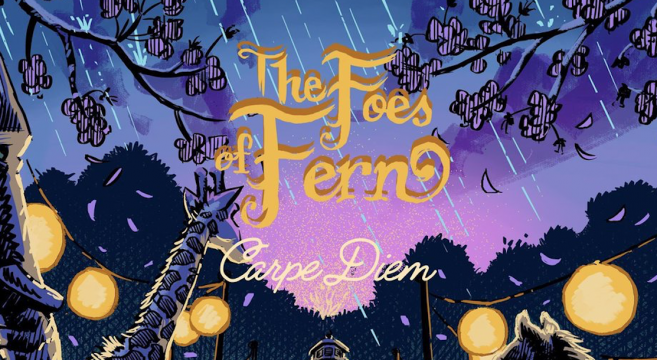 I’m Sure She’d Hate This: Reviewing ‘Carpe Diem’ by The Foes of Fern

Foes of Fern head honcho Matt Fernicola begun life in the New Jersey music scene as the consummate foil. He took his Boston-based band Airacuda down this way and proceeded to tear up the local stages. But while Airacuda was heavy on glam, musicianship, and the charisma of frontman Matthew Menges, it was light on songs, releasing just one EP in its time.

Fernicola (or “Fern” as he prefers to be called) moved on to different projects, playing sideman to Avery Mandeville, Julian Fulton, and Lords of Lichtenstein, before forming The Burns with singer/songwriter Joey Henderson. And while The Burns began amassing a loyal following on the backs of two strong records and a wickedly entertaining live show, Fern soon found himself playing second banana to yet another charismatic frontman. So, in his off-time, he quietly formed the Foes and started releasing singles. First came the horn-driven, Johnny Cash-nodding “April Came in the Rain.” Then we got the George Harrisonesque, string-swelling “Sun Day.” The award-winning music video “Bike Song” followed, and – well – you get it. Seven singles and a 2019 Burns breakup later, we’ve finally arrived at ‘Carpe Diem.’

Throughout the course of this record, mountain-high arrangements create a sonic landscape so dense; so rich that anything less than your full attention would be a disservice. Gang vocals stack on top of harmonies. Horns poke through walls of percussion. Strings ebb and flow and after a while, there’s so much movement that you hardly know where to point your ears! Don’t approach this album if you don’t have time because repeat listens are pretty much a requirement.

Highlights include the impressive, bass-driven “Maria Maria,”, or falsetto-fueled tune “The Monkey.” Then there’s “Simple and Plain” with its skittering hi-hats, horns, and steel drums. Lyrics are conversational and light-hearted, and Fern often pokes fun at himself, suggesting that while we’re all vain and social media obsessed, the songwriters among us add an element of hypocrisy by writing about it and having everyone sing along. Speaking of singalongs, ‘Carpe Diem’ closes with the closest thing to a hit that The Foes have yet had: “Ghosts (Girl in All My Songs).” It’s a tune Fern & Co. have been singing since the very beginning, often ending their massive, theatrical sets with it. “Ghosts” is a crowd pleaser and leading up to its release, I often wondered how such an effective live song would translate on record. Those questions have since been put to rest; The Foes pulled it off with aplomb.

Like any good thesis, the final statement wraps up the entire affair, and by the time “Ghosts” arrives, the sheer scope of this album proves staggering. Soaring arrangements make their final and finest appearance as horns duel with a stack of vocals that sounds like it’s 100-people strong. As the song reaches its peak, Fern tears off a guitar solo so epic that if you don’t find yourself at the summit of a mountain, shirt blown open and hair billowing, you might be listening to it wrong.

Regardless of the many detours, or the number of years it took to make this album, ‘Carpe Diem’ amounts to an expertly crafted collection of songs so undeniable in its ambition; so massive in its scope that it’s hard to believe it even exists. And yet here it is in all its glory, ready for Fern and his bandmates – Joe Pomarico, Victoria Laurence, Dave Chiesa, Owen Flanagan, Victoria Romano, Andrew Oliva, Jessie McCormick, Andrew Ludewig, and Steve Heimbuch – to lead the next arena-sized singalong.

The Foes will be supporting the release with a livestream from The Saint at 7:30 p.m. on Saturday August 29th which also features Brian Erickson, Bobby Mahoney, and Nick Ryan & Taylor Tote.