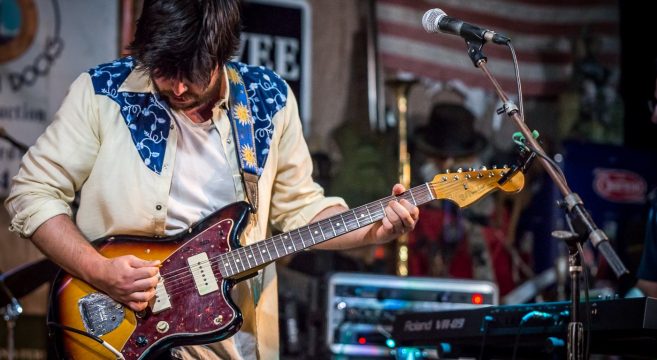 Video Premiere: “The Back Door” From CR and The Nones

We have been a fan of singer/songwriter Chris Gennone since his time with Tribal Days and Winnebago. His honest and poignant songwriting has always stuck an emotionally raw chord with listeners. With CR And The Degenerates he released 5 albums of amazing indie rock that used influences of folk, country and folk to create a rich tapestry. Based out of Jersey City, CR and The Nones is his new project and in a time of uncertainty this is certainly something to look forward to. We are thrilled to premiere the new single “The Back Door” off their soon to be released debut album.

Living in Fear, which will be released on new label Favorite Friend Records on November 6th, is 2 introspective years in the making. Gennone has said that it is the darkest, strangest, and most personal record he has made. If that doesn’t whet your appetite during these Kafkaesque times I don’t know what will.

“The Back Door” opens over gorgeous and plaintive strings while scenes of low-fi aquatics and road trips intermingle with shots of the band. Gennone channels Neil Young in the melancholy delivery of vocals that perfectly conveys the longing of trying to reach for the stars while knowing you may not even grab one. Echoes of Real Estate are here in the melodies especially in the same way that band has a knack for creating wonderfully bittersweet tunes. Throughout the years Gennone’s songwriting has matured and his focus has sharpened. “The Back Door” is a perfect end of summer song and hints of the greatness Living in Fear promises.

You can stream “The Back Door” on Spotify here.