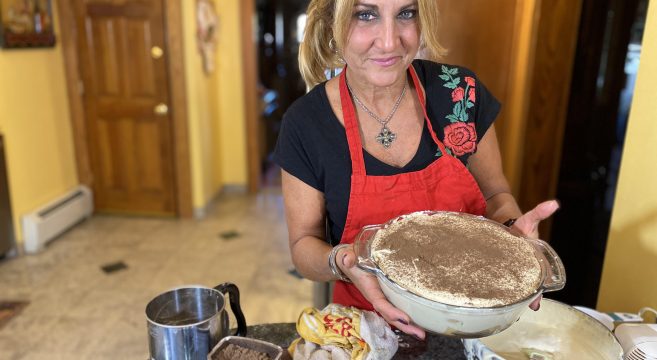 In episode one we really pushed the limits of creativity by making shrimp scampi in a coffee pot. For episode two we thought it would be in the best interest to take a more traditional approach. Here is Mama Cozz’s decadent Tiramisu.

Tiramisu is an Italian dessert, whose name translates to “pick me up”. It is something between a cake and a bread pudding depending on who makes it. Sometimes it’s coffee flavor-forward sometimes it’s a rum flavor forward.

This recipe was inspired by a trip to Italy my mother took. While there she attended a cooking class in the Tuscany countryside. My mother and her friends danced around sipping wine while their instructor Carmella taught them her recipe.

Cold Brew
– Coarsely ground a coffee of your choice, for this we used a traditional washed coffee with caramel flavor notes.

– Pour into french press then add COLD WATER. (Depending on the size of your french press your quantity of coffee will vary however the golden ration is for every one gram of coffee allow 17 grams of water)

– Steep for a minimum of 12 hours and a maximum of 36. 24 hours will greet you with a deliciously thick, low acidic iced coffee concentrate reminiscent of chocolate milk.

Fillings
– In two bowls separate the egg yolks from the whites.

– Add one cup of sugar to yolks and whisk on low flame until custard-like filling forms. Incorporate mascarpone cheese until melted and remove from heat. Set aside to cool.

– Finally use a hand mixer to whip heavy cream until you have whipped cream.

– Dip ladyfingers in the remaining cold brew a then layout in rows.
– Spread a layer of fillings atop and repeat both steps until your vessel is filled to the brim.
– Sprinkle cocoa powder atop and let sit in the fridge for 24 hours.

about the author: John Cozz

John Cozz is a musician, artist, and coffee roaster. New Jersey is his muse for creation and it’s a theme that shines in everything he does.