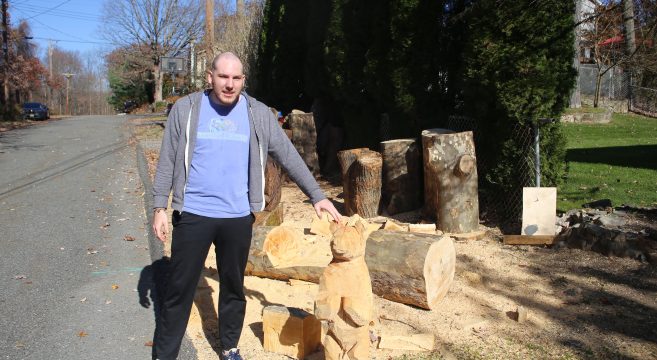 We’ve been following Matthew Smith’s musical career ever since we happened to catch a solo set of his many years ago at a basement show in Montclair. His thoughtful and heart-felt music, whether fronting his band Hodera or in solo project Bravely, has moved us ever since and we’ve happily followed him around New Jersey and beyond.

Like all of us in 2020, we maintain our friendships on social media now and back in July we noticed that Smith’s timeline was starting to show examples of a new passion. After two highly anticipated sold out Hodera shows at Asbury Park Brewery had to be cancelled, Smith took up a new passion during the quarantine. Woodcarving. At first, wood carved spoons and spirit faces showed up on his social media. They were crude but showed potential. It was not long before impressive bear carvings followed.

We asked if we could come visit him at his home and talk about this new venture. On a beautiful Saturday morning we sat outside, enjoyed some coffee, and learned about how Smith ended up taking this creative path.

We talked about the creative process and how that meshes with his different creative endeavors. It was a great conversation and is transcribed below (edited for brevity and cohesion).

How did you get into woodcarving?

I went on a social distancing vacation to Ashville, NC, in the Smoky Mountains because I had been there a few times through touring. I just love it there and there is this small mountain town called Black Mountain and there was this woman outside making ceramics and it started downpouring so we ran to her little hut and we just hit it off. She said she would give me a lesson later in the week but we didn’t manage to get together. However, when I got home I thought “I want to make stuff.” I am not sure what drew me to woodcarving but my sister-in-law’s friend whittles spoons with a pocket knife so I bought a set of carving knives and tried to whittle a spoon, which was really difficult and hurts your hands.

I wanted to go bigger so I bought chisels and a hammer. I saw people on YouTube using these to carve faces. I realized really quickly this was too difficult so I went to power tools like a Dremel and just making little spirit faces and owls. Then went up to a die grinder which is basically a huge Dremel that is more powerful so I could start working with logs. I then said I would never go to chainsaws as they are too dangerous but I kept going and eventually got chainsaws.

Has anyone mentored you while you were learning the process?

There was a 9 foot Bigfoot in Pompton Lakes that my dad took a picture of with a really dumb face on it and it had the carver’s Instagram handle on a sign. Turns out he is a great artist named Brett Strother. So I checked out his YouTube videos and reached out and I met with him twice. He showed me all the specific tools that I should get which of course sent me down a financial hole. You buy a tool and figure out it isn’t the right one or needs this attachment. From there a lot of trial and error. But he certainly taught me a lot.

You seemed to have improved very quickly. How do you think that happened? Are you naturally drawn to the arts?

I mean I don’t think I am really good. I think guys like Brett are really good. Maybe it is a lot of practice. I mean I never had much art training. In middle school I was really into art class and in 8th grade the teacher recommended me for AP Art when I got to high school so maybe there was something there. However, our family ended up moving and all the high school art classes were full in our new town. So it wasn’t until my senior I figure I’d try again and took an art class.. So I took a class with all the freshmen and I wasn’t that into what they were teaching, shading and stuff, so I dropped the class.

Do you approach the creativity of woodcarving differently from songwriting?

Though they are completely different there is a formula to each. I remember asking Brett “So you start with the back first or the sides?” Let’s say with a bear. You start by cutting a triangle for the head. You start with 2 front cuts and then angle down cuts for the back of the head. And he said he has been doing it for so many years know he just goes. He’ll decide then where to go and he can dance around it. I feel that was about songwriting. I can start with a line or I can start with a melody or guitar riff and dance around it and play with new ideas. It is intuitive I can just go to it. It in ingrained.

Another similarity with both crafts is what to do when you’re bored. In music I would try something new like changing a couple of strings on the guitar to different tunings or go experiment with drum machines or synths. Same with woodcarving. I’ve done bears so now I am making a bear throne as I am getting a little bored with the basics.

Has anything surprised you about woodcarving?

It is very, very physical. I get quite a bit of exercise. After an hour or two I’m drenched in sweat, covered in sawdust. Then a half hour clean-up. It is grueling work. But it’s great that you can focus on something, then walk away feeling you’ve really done something.

Another surprising thing is I really never got to know my neighbors until now. But being out here, even on this little backstreet people walk past and stop. People will stop their cars in the middle of the road, then pull over, get out and ask some questions. I’ve even become friends with the garbage men. This neighbor across the street bought one of my first bears.

Where do you get the large pieces of wood?

It’s difficult. In the beginning I called a lot of tree companies and Googled forums for chainsaw companies that might supply wood. Luckily Brett works for a tree company and has a lot of property. He has an entire section filled with logs and has been helpful. Specifically there are only certain woods you can work with. Pine is the best. I am working with beech now which is terrible to work with. I eventually found some guys who work for a train company and they remove trees off the railroad tracks and they give me the best logs. I kept digging and found a few tree companies that now work with me.

Are you still writing music?

I am currently finishing a record with Doug (Gallo) that will be a Hodera/Bravely split but for some reason I am not currently really writing or performing at all. I am actually only writing with my dad at the moment and we are writing a rap song together. He is really getting into rap and we making demos at the moment.

Do you miss touring and connecting with people through music?

Sure. I was doing livestreams but I got really sick of doing them early on. You reach a point where you have to stop giving a crap about the likes and the plays. That was something I really had to work on to get over because that was taking over. Who is watching, how many are listening on Spotify? As a kid writing songs it was like “I need to be heard, I have something to say, I need to be understood.” Once you start meeting people and they have similar stories and you connect with them you go “Oh, that’s what this is about.” To be honest I’ve really enjoyed touring solo out of my car playing for 10 or 20 people where I can really connect and tell my stories whereas with Hodera where I was loading a huge van and being upset if there wasn’t 50 people in the room.