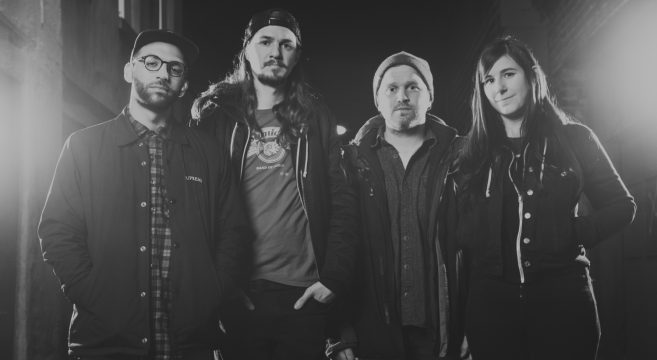 Montclair pop/punk/indie band trü were on quite the trajectory before the world basically got turned upside down. Their self-titled debut EP generated many positive reviews in the local music press and the band were named The Deli Magazine’s “Emerging Artist of the Month” in October 2017. Their follow up EP, 2018’s Growing Pains, saw the band, well… growing, and showing no signs of a sophomore slump. Though quiet for a bit the band has not been idle. The wait is worth it as they are set to release their new EP the outstanding Closer Than It Seems on November 20th.

Opener “Peace of Mind” may sound familiar as it was the quiet guitar and piano closer on Growing Pains. It gets the full-band-shoegaze treatment here and it is glorious. It would not be out of place on an album like Ride’s Nowhere. It works so well as an opener here as waves of layered guitars from Pat DeFrancisci and Keith Williams crash over you as you contemplate where you might find your piece of mind during these difficult times. The new Zoom culture is the focus of first single “Connected” and is a perfect pop infused indie tune. “Waiting on the phone for you to notice me” Williams sings and subtly already hints that this new communication is far from ideal. I always feel kind of sad after a Zoom meeting ends, the emotions seem vaguely artificial. “Communication wanes with innovation” is the lyric of the year.

Elsewhere on the record the band display a purpose and cohesiveness that many bands can only dream of. The band sometimes gets compared to Weezer and second single “Comets” references that band in the best way with punchy guitars and a driving beat. “Honeycomb” is a fast paced jam with some nice harmonies which highlights the rhythm section of bassist Cindy Ward and drummer Steve Cerri. The drone laden “Not Okay” emotes for all of us who feel like we are losing our grip on sanity. It does provide comfort to know you’re not alone. Closer “Astronomy” ends on a high note as it bounces along upbeat melodies and is a love song for 2020. “This is where we’re meant to be.”

Many of the songs on the EP deal with feelings of depression. I asked DeFrancisci if writing these songs is cathartic. “Absolutely. I really think it’s amazing how consuming and creating music can be cathartic for so many people going through so many different things.” He continued, “A lot of times if I need to take a breather or just get out of my thoughts for a bit picking up my guitar is the exact kind of therapy I need. Being in that mindset I think it’s just natural for many of the songs to be about anxiety and depression.”

These days can certainly be disheartening and Closer Than It Seems is not afraid to say so. It does not shy away from the dark thoughts that creep and driving home that feeling out-of-touch can be so damn overwhelming at times. However, it is in these shared experiences that one has to look for a glimmer of hope. Closer Than It Seems acknowledges that small, hazy ray of sunshine poking through the dark clouds. It might not be easy to spot but it is there. Bask in it.

The album sounds amazing thanks to the production of musical impresario Max Rauch and will be released on his label Pizza Bagel Records on November 20th. The preorder is up now on Bandcamp. The band has also collaborated with Cozz Coffee to come up with their own blend of coffee called Trü Brü that will be available in a special package with the release of the record.

Bloomfield based musician and coffee roaster John Cozz directed “Connected” and it is a wonderful capsule of what a music video looks like in 2020.