THANK YOU, New Jersey! (from YDKJ)

We’re reposting this verbatim from NJ.com and we couldn’t be prouder of our NJ residents! 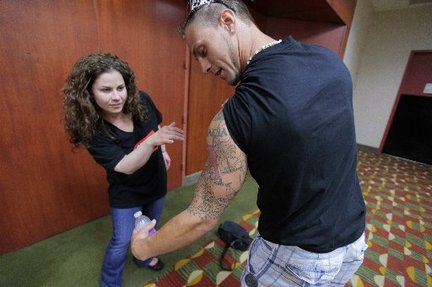 ATLANTIC CITY — It might be a ratings juggernaut and a cultural phenomenon, but the beach blanket bacchanal known as “Jersey Shore” came up surprisingly short in Atlantic City today.

Fewer than 100 people showed at an open casting call for the MTV reality show at Harrah’s Resort Atlantic City, where recruiters spent more than nine lonesome hours waiting for hopefuls in a ballroom.

At one point, a member of the “Jersey Shore” team was overheard calling would-be Snookis and Situations on the phone, urging them to hail cabs and hightail it to the casino for a shot at stardom.

That the casting call fell on a hot and sunny Sunday in the middle of a holiday weekend probably didn’t help. The buff men and women who make up the “Jersey Shore” demographic are, by definition, beach people. They’re also known to party well into the morning, making an 11 a.m. appointment something of an uncertainty.

“A lot of people that we interview, they get in front of the camera and one of the things they say is, ‘I never wait in line,’” Allouche said “I think everyone’s waiting for a personal invitation.”

An out-of-the-blue hit, “Jersey Shore” grew into the highest-rated show in MTV history last year, both tantalizing and polarizing viewers with its hot-tub trysts, stormy relationships and play on Italian-American stereotypes.

While producers have suggested new talent will be added to the existing cast in the second season, Allouche wouldn’t confirm that today. He did say new roomies on the show will have big shoes to fill.

“It’s a legacy, and now we’re looking for people to live up to that legacy,” he said.

Tony Denezza believes he’s the right man for the job. A confident and chiseled former exotic dancer who calls himself “Juice,” Denezza, 29, drove from his home in Pittsburgh for the casting call. In true “Jersey Shore” fashion, he went clubbing Saturday night, then slept in his car and prepped for the audition in a men’s room.

Denezza, currently between jobs, said he identifies with the cast’s naked pursuit of fun and sex.

“That’s what I do every weekend,” he said. “That’s been my life for the past 10 years. If what they do on the show is wrong, then my whole life is wrong.”

Meghann Brown, 29, a massage therapist who arrived from nearby Ocean City in a short skirt and hot pink pumps, didn’t shy away from the controversial “Guido” label.

“There are so many words in our language that have changed in connotation from generation to generation,” Brown said. “It used to be an insult, but as I grew up it became more of a joking term, more of a fun term. The meaning of the word ‘Guido’ has definitely morphed.”

One Response to THANK YOU, New Jersey! (from YDKJ)