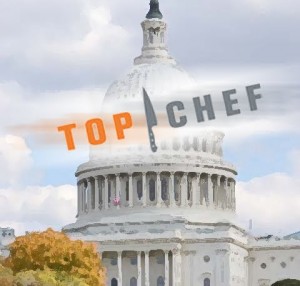 Bravo’s popular Top Chef premiered it’s 7th season last night and there is a New Jersey native in the running.  Kevin Sbraga, 31,  is executive chef at Rat’s Restaurant in Hamilton and he will hopefully kick some butt.  “Jersey is here” he announced early in the episode.

In the first “Quickfire” challenge his skills were evident as he was one of the 4 fastest in the mise en place race of peeling potatoes, chopping onions and breaking down chickens.  Unfortunately his dish was deemed too salty by the judges and he did not win. In the elimination challenge Kevin made Pennsylvania lamb and was once again chosen as one of the 4 best.  Although he did not win this challenge either, the judges were impressed.

Check out the show on Wednesday’s at 9:00 PM on Bravo to see how far Kevin will go.  The big question…will he work Taylor Ham into one of his dishes?

Pin It
Previous post:
Nation’s Longest Traffic Light Found on Route 23 in West Milford Next Post:
Bloomfield Side Roads get a Tree-gasm