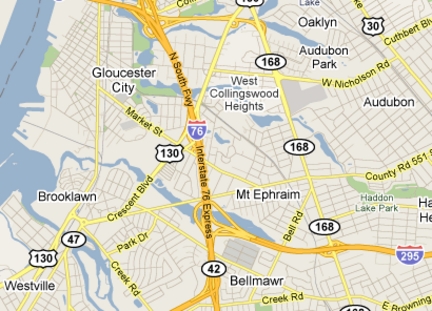 The other day I was  checking my e-mail and I see a link to the country’s most deadliest highways. Naturally, I wanted to see where New Jersey highways ranked compared to the rest of the country. The list starts with the 5 worst roads, of which #’s 1,3,4 & 5 are taken by California and Florida. But there at # 2 is New Jersey. So I am wondering what highway it is, the Parkway?, the Turnpike?, Route 80? Nope, none of those. It’s Route 76.

My response was the same as everyone else I have mentioned this to : What is Route 76?  There’s no Route 76 in New Jersey! That must be a typo or something. Maybe they mean route 78. So I look up Route 76 in New Jersey and sure enough, it does exist. It is part of the Philadelphia Highway system that leads into New Jersey. The road stretches from the Atlantic City Expressway to the Walt Whitman Bridge in Camden County. It is used primarily by out-of-state motorists traveling through and tourists going to Philadelphia. The article also states how many miles long the stretch of deadly highway is in each case. #1 is Route 95 in Florida with 382.15 in state miles. #4 is I-15 in California with 287.26 miles of dangerous highway in state. Guess how many miles of Route 76 there are in New Jersey? Answer : 3.05 miles. The other roads on the list are generally hundreds of miles long while Route 76 in New Jersey is just 3.05 miles long. The next NJ highways on the list come in at #19 & 20 and are Route 80 and Route 95 (The Turnpike).

I see in the comment list under the article a few people saying that they can’t figure out why California and Florida are near the top of the list, but that it makes perfect sense that New Jersey would be there. Of course these comments are made by people that aren’t from around here. Still they irritated me, so I wondered how our state compared to other states on the whole in terms of fatality rates. I discovered that the government has a database that tracks this information for every state in the country. It is called FARS. If you go to the website, http://www-fars.nhtsa.dot.gov/States/StatesFatalitiesFatalityRates.aspx, you will see that New Jersey has the 4th lowest fatality rate in the country. Considering the bad drivers that I see on the road every day, that statistic suprised even me. So there you have it. Despite the misleading use of statistics on the at list, New Jersey is the 4th safest state to drive in based on fatality rates.  Just stay away from Route 76 until around 2016. New Jersey has a proposal to rework the stretch of Highway to make it safer, http://www.state.nj.us/transportation/works/studies/rt295/faq.shtm. It is planned to start in 2012 and end in 2016.