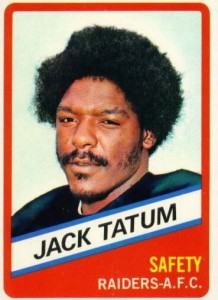 Today the sad news came that former Oakland Raider All Pro safety Jack Tatum died of a heart attack at the age of 61.  Nicknamed “The Assassin,” he was feared for the hard hitting style he showcased in the NFL and as an All American at Ohio State.  Unfortunately, he is best known for a hard hit against New England Patriot wide receiver Darryl Stingley in a preseason game in 1978.  That hit left Stingley paralyzed for the rest of his life.

I was a huge Tatum fan as a kid.   Growing up in the late 1970s I was drawn to the tough image Raiders like a moth to the flame.  Seeing Tatum, John Matuszak, Ted Hendricks, and that bald bad ass Otis Sistrunk crushing opposing offenses was a sight to behold.  Later I felt sorry that Tatum became known just for the Stingley incident.  He was never the same player after that.

Tatum grew up in Passaic, NJ.  My dad and his family also grew up here.  We eventually moved to Clifton but one of my uncles stayed in Passaic.  My cousin actually played with Tatum as a Passaic Indian.  He told me he was a mean, tough player even back in his high school days playing in Boverini Stadium.  Every year on Thanksgiving, Passaic plays it’s old rival the Clifton Mustangs.  My wife and I attended the 2008 Thanksgiving game in Passaic as Jack came back to have his #32 jersey retired.  It was Jack Tatum Day and I couldn’t miss that.  He seemed happy that day and that is how I want to remember him.  You can see some photos from that day below. 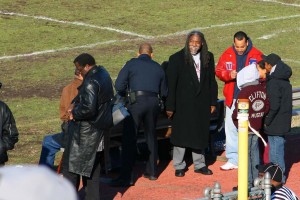 Jack enjoying a day in his honor 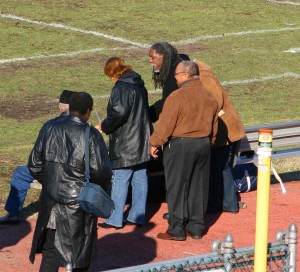 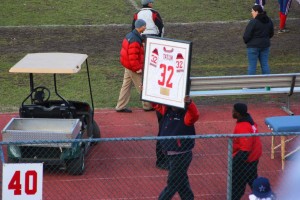 Pin It
Previous post:
A Stroll Through Jersey City – The 2010 Scott Kelby Worldwide Photowalk Next Post:
Things to Do in Jersey—July 30-August 1st 2010