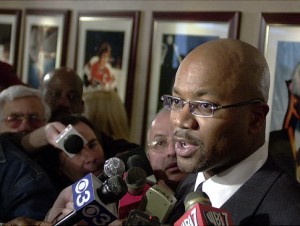 God Save the King

New Nets owner Mikhail “Nyet” Prokhorov announced today that Billy King is the new general manager of our hard luck team.  Poor guy.  Had to pack his bags in Philly where he had been GM for 10 years, cross the Delaware River, and head up the Turnpike to set up camp with a team that went 12-70 last season.  Nowhere to go but up, right?  I mean they can’t do worse, go 8-74, right?  Anyone?  The other question is will Prokhorov let King really make all the decisions a GM should.  I saw Nyet on 60 Minutes about a month ago and he doesn’t strike me as a “hands off” kind of leader.  If King doesn’t get some results quick he may end up on a bread line.  Sure we didn’t get LeBron James.  We got a King!!

Thanks to my man “Nicky Net” for the update and remaining a Net fan even though the Parsippany High School basketball team could give the Nets a tough challenge.

One Response to Nets Get New Sucker…err General Manager