Movie Review – The Other Guys 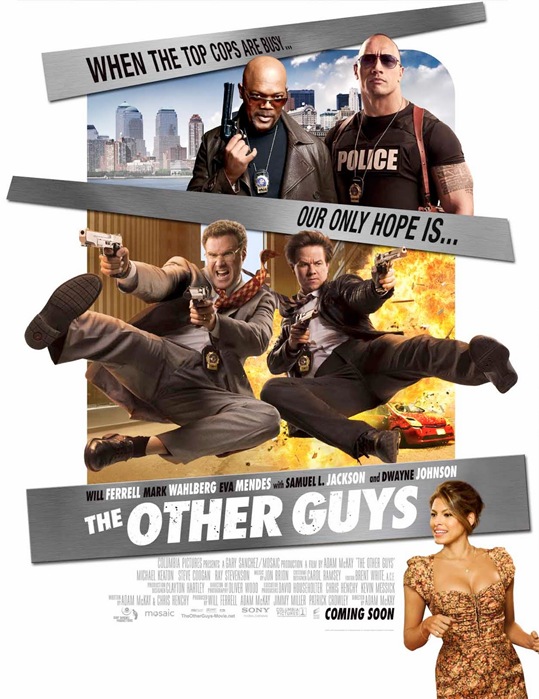 In The Other Guys, Samuel L Jackson and Dwayne Johnson are supercops who always catch the bad guys through any means necessary, even if it involves wrecking half the city. They get all the glory, citizens and other police officers idolize them. Will Ferrell and Mark Wahlberg are “the other guys”, the policemen who sit by the sidelines filling out paperwork. That is until a headline case innocently falls into their laps.
This movie is really funny, and not just normal funny, but wacky, weird and sometimes surreal. It has a similar feel to Step Brothers and Talladega Nights, which makes sense, since it has the same co-writer and director, Adam McKay. Comedy is extremely subjective and I’m sure that the comedy will connect with some people but be lost on others. For me, it worked most of the time.
Will Ferrell has evolved his nerdy, witty observational comments into an art form.
If you see this movie, you will learn the answers to strange questions like “Who would win in
a fight between a lion and a tuna?” ,”How do you accidentally become a pimp?” or “How would a person get the nickname ‘Yankee Clipper’?” The movie trailer is suprisingly conservative and thankfully so, in that it does not reveal some suprises, plot twists and guest stars.
There is some controversy about the end credits, which you should stay for by the way. Anyone who thinks that the credits don’t belong has missed the whole point of the movie. Yes, it is a very funny comedy, but at the same sime it has a very topical theme that affects everyone. The credits underline the theme that was demonstrated throughout the entire film. While watching them, I started thinking back to a lot of scenes that now had a double meaning that was so subtle, I hadn’t noticed before. The movie is saying that most of us are “The Other Guys” in a way that you will not expect.

Pin It
Previous post:
Bobbi Brown and Montclair: An Article from Inside Jersey at NJ.com Next Post:
New Jersey’s Own Troy Murphy is Coming Home, Well Sort Of.

One Response to Movie Review – The Other Guys