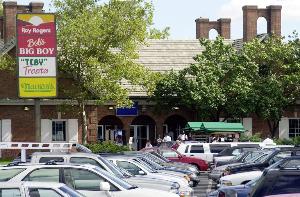 State transportation officials want federal permission to add restaurants at rest areas on interstate highways in New Jersey, such as Route 80.  Food and beverages, but not gasoline. Congress placed a prohibition on the commercialization of interstate rest areas shortly after the Federal-Aid Highway Act of 1956.  Since then, interstate rest stops have only been able to provide bathrooms and vending machines.

News of the agency’s plans comes nearly two weeks after fuel merchants sent a letter to Governor Christie, asking him to reject a proposal to push for full-service rest stops on the federal interstate highways. The merchants argued that adding fuel and food to rest stops would hurt similar businesses that operate off highway exits. Many merchants also believe that once the restaurants are in, gas will follow.

Occasionally I have been on Route 80 looking for food and the only way to accomplish it is to get off at an exit and search.  I have been helped by blue signs that tell where food and gas are located off an exit. Sometimes, they have mile amounts on them as well like 1.2. I wind up looking at my odometer trying to anticipate exactly where they will appear and wondering if you haven’t accidentally veered off course. And all of this usually happens at night. However, as you are searching and when you find your food or gas, you get a chance to explore and discover a town and area that is unknown to you and may be very interesting.

Having driven all over the country, I have always respected the minimalist philosophy of Interstates like Route 80. They are pure highways, committed to getting you where you are going with no distractions.  Having as few exits as possible, and rest stops that sometimes border on scary in their barren emptiness, these roads do it all to make sure there is as little traffic as possible. These roads can be boring, but I believe that doing anything differently would dilute that formula.