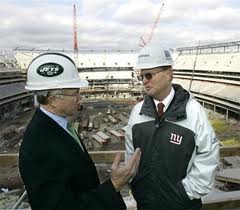 “And Also With You”

It All Started with a Piece of Birthday Cake

The new, reformed relationship between NY Giants owner John Mara and NY Jets owner Woody Johnson began in September of 2005 when the two had a long drawn out meeting with chairman of the New Jersey Sports and Exposition Authority, Carl Goldberg. The meeting, intended to bring the two rival owners closer together, had each owner sitting in a different office but eventually ended with Mara and Johnson meeting in one room and enjoying a slice of birthday cake together. John Mara of the NY Giants ate a green piece of cake representing the Jets team colors and Woody Johnson of the NY Jets ate a blue piece of cake representing the Giants team colors. It was here and at this moment that the two sides conceived a mega-plan to, for the first time in memorable history, unite and build a brand new stadium together to house not one but both of their teams, with equal billing.

The plan was as follows:  it will not be called Giants Stadium anymore; it will no longer be home of the Giants, with the Jets just paying rent for field and locker room privileges; it will not be any of that. The plan stated that it would be a state-of-the-art facility that does not favor the Giants or the Jets, but favors each team evenly. Even naming rights would be treated equally and not be given to either team, but to a third party that was to be (and still has not been) determined.

Now that it’s built, we can see the master plan at work. With more then 2,200 HD video displays and over 10,000 miles of data cable, the New Meadowlands stadium is as high tech as they come. Features include

There are four main sections built into this mega structure. The West Hall, The Coach’s Club, The Commissioners Club/Gridiron Club and the Touchdown Club each with it’s unique seating arrangement and up to date technology.

All of this makes for a new era of football played in New Jersey. No longer will Jets fans have to cringe when pulling up to the Meadowlands while seeing Giants stadium, and no longer can Giants fans brag that it is “our” home and the Jets are just secondary. All of us football fans, whether green or blue play under the same lights that are, once and for all, equal to both.

Pin It
Previous post:
Things to do in Jersey September 17 18 19 2010 Next Post:
Montclair to Install First Public Electric Car Charging Stations in N.J.