Bon Jovi No Longer Living on a Prayer That They’ll be Inducted into Rock & Roll Hall of Fame… They’re In for 2011! 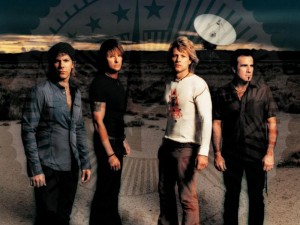 They are one of New Jersey’s most famous creations.  They’ve had more than 20 top ten hits. They’ve been together for more than 25 years.  They’ve opened Prudential Center AND the New Meadowlands Stadium.  And, they are still going strong. Fans all over the world have been Keeping the Faith. Their boys have really been around The Circle a few times.

So, why the big delay in getting them into the Rock and Roll Hall of Fame? Did they Give Love a Bad Name, get caught Living in Sin or take some Bad Medicine?

Bon Jovi has Always been kind of treated like a Social Disease and gotten the short end of the stick when it comes to street cred.  They seem to have a good attitude about it, maybe feeling that It’s My Life.

Perhaps they’re too pretty or had too much hair in the 80’s.  Perhaps they have too many female fans who think Jon is Born to be My Baby and can’t be taken seriously in the rock world. Whatever the reason, they are finally past all that and are getting their due.

They’ve learned to Never Say Goodbye to their Hall of Fame dreams because the Hall must have said, I’ll Be There for You.

Time to get the caravan together, get ready to be a Runaway and hit the Lost Highway and make plans for a Cleveland road trip so Bon Jovi can Lay Your Hands on Me and the rest of their fans.

The list of nominees for the 2011 class of inductees was announced today and the boys from Sayreville are in there in a Blaze of Glory along with some other really great groups:

Wanted Dead or Alive, the boys are going to rock the hall for sure next year and Make a Memory!  Who Says You Can’t Go Home and cheer on your home state’s second most famous musicians?