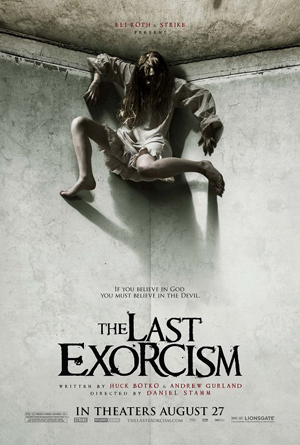 The Last Exorcism is a horror movie in the pseudo-documentary style of the Blair Witch Project. It is a very well acted and smartly written movie. The story is built intelligently, the characters are well developed. The lead (Patrick Fabian) quickly draws you into the story and at the same time you understand his personality and motives. He carries the movie very well and the movie has a very real feel to it.

Reverend Cotton Marcus is going to perform his last exorcism and he is bringing a film crew along to document it. He has received a letter from a father requesting that he travel to their house and perform an exorcism on his daughter. Due to his daughter’s strange and destructive behavior, he believes she is possessed by the devil. The movie does a nice job of slowly building the suspense and revealing information. What is especially nice is how the movie plays with your expectations and assessments of the situation. I found myself flip-flopping on what I believed was really going on during the movie as a result of plot developments. The big problem with the movie is the ending. About 90 percent of the movie is very well done, but the final scene is very uncharacteristic of the rest of the movie and too over the top. It’s like they wanted to have a shocking climax like the Blair Witch Project, but they went too far. It reminded me of the Stephen King “IT” mini-series where the subtle, but very creepy and disturbing clown was replaced at the end with a literal menace, a giant spider that was not at all scary and really kind of laughable.

It makes me wonder if this movie was screened for audiences. I would think that the reactions they would have gotten would have made them re-shoot the ending. The final scene is a complete mystery leading into it and could have gone in a lot of different directions. They could have shot 3 or 4 different endings and then chosen the best one.

After the movie was over, people I saw it with as well as some fellow moviegoers who entered our conversation all agreed on two things. One, the movie fell apart at the end, and two, none of us really understood exactly what the ending meant. That is one good thing about the ending. It makes you think and try to figure it out. Parts of it are very easy to understand, but to make everything fit together and relate to earlier scenes and information we were given was not an easy task. It was a good conversation because different clues were brought to attention by different people. I was happy when I got home to see all of the confusion on the message boards about the ending of the movie, but I now think I have it mostly figured out.

Anyway, like i said, a lot of good stuff going on here : good acting, good writing, good story, up until the end.

Pin It
Previous post:
RUSH – PNC Bank Arts Center 09-03-2010 Next Post:
As a New Jersey Site Should We Cover the Giants and Jets?