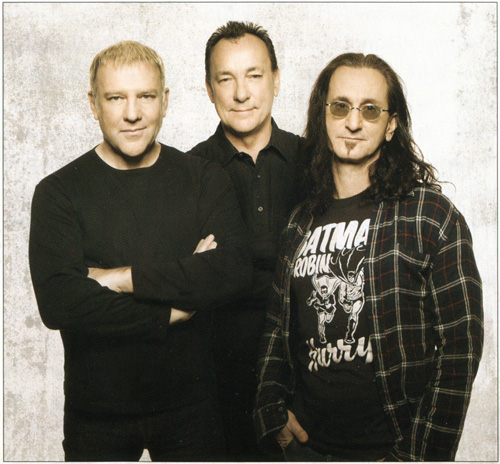 Who is afraid of a little hurricane when Canada’s favorite power trio comes to New Jersey? Hurricane Earl was pretty much a no-show and we were happy for that as we had lawn seats this evening. Rush is on their Time Machine Tour in which they are playing the seminal album Moving Pictures in it’s entirety.

The show opened with a Time Machine-themed video which transitioned into familiar beginning of Spirit of Radio.  This got the crowd pumped right away.   After an hour of running through some new and old songs spanning their vast catalog they ended the first short set with a great version of Subdivisions.

Geddy then announced a short break “as we are about a thousand years old.” The 25-minute break seemed a little long. Come on guys, you’re not THAT old! However, all was forgiven when the familiar opening blast of Tom Sawyer kicked off the Moving Pictures part of the show.  No one knows what Side A and Side B mean anymore, so here’s your chance to look it up.  Hearing the popular Side A songs including YYZ and Limelight was good but hearing rare Side B tracks like The Camera Eye was the biggest treat of the evening.  After Vital Signs Geddy said “Can’t believe that is 30 years old.  Alex has shoes that old”.

The strong second half included crowd favorites Closer to the Heart and 2112 Overture/Temples of Syrinx which came with the enthusiastic shouts of “Hey!”  The encore was an intense version of La Villa Strangiato followed by Working Man . Alex Lifeson obviously still has it as the guitar playing was phenomenal.  Throw in Neil Peart’s obligatory drum solo and you’ve got yourself an awesome Rush show.
It’s amazing that the guys can still rock this hard closing in on forty years of recording and touring. They look like they’re still having fun.  And so are we.

The Spirit of Radio

Closer To The Heart