We were in the mood for hummus and falafel one night so we searched around the internet for a place we hadn’t been to yet and found King of Shish Kabob.

Boy were we happy we found them! 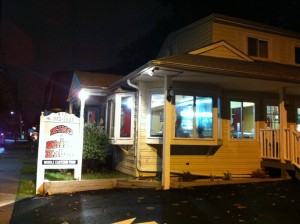 The restaurant is near where McBride meets Browertown Road and is right on the Passaic River off Route 46 in West Paterson (OK, OK, call it Woodland Park, if you want) and looked like it used to be a house.  It had about six large 4- or 6-top tables and was very nicely decorated so we felt at home right away.

We started with the cravings as appetizers:  hummus with tahini which could have been a little spicier and served with some of the thinnest and most delicious pita we’ve ever had and nice little falafel patties that were excellent.  So far, so good, we thought.

Well, we had no idea what was going to hit us when the main courses arrived.  They were mind-blowing. 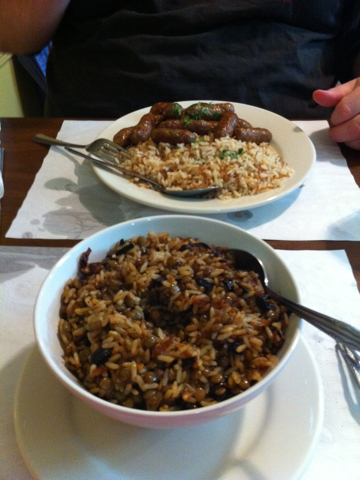 I got the Mjadara.  It’s the bottom dish in the picture above.  Looking at this picture makes me want to go back to King of Shish Kabob again immediately.  It is a very simple dish of lentils and rice mixed with onions that were so browned they were black (definitely not burned…  just wonderful and darkly browned).  I can’t believe how delicious this was and how much it looked like just a side dish.  If I’d seen it in a buffet, I probably would have passed it by.  Get this, my friends, if you ever make it to King of Shish Kabob and you will not regret it.

Ed got the Syrian Sausage which is little spicy lamb sausages served with rice pilaf and salad.  You can see it at the top of the picture above.  I can’t eat too much lamb but I had a teeny piece because he said it was very good and I completely agreed.  It was so spicy it was almost sharp and a little gamey like lamb usually is.  The rice pilaf side was good but was overshadowed by my out-of-sight mjadara.

On top of all this delicious food were the terrifically reasonable prices here.  My Mjadara was $6.99 and the lamb sausage was $12.99.

So, if you’re in the mood for Mediterranean and you’re near Route 46, check out King of Shish Kabob and you won’t be disappointed!